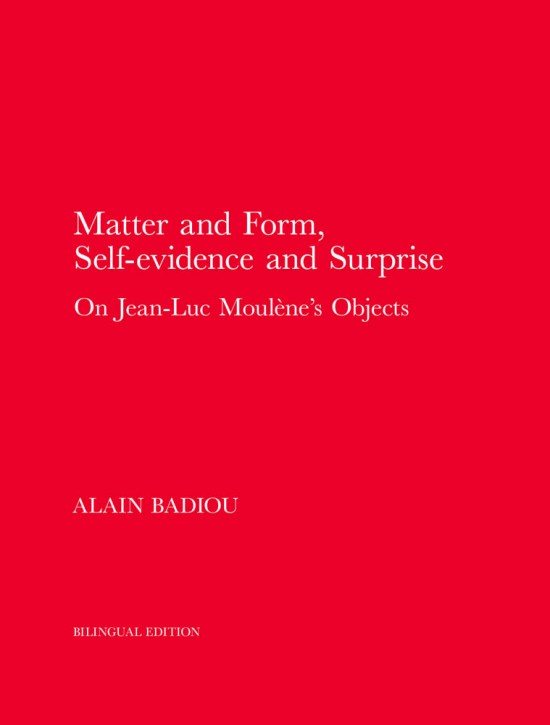 In this unique essay, first delivered as a lecture during a panel discussion with the artist and philosopher Reza Negarestani, Badiou identifies and “dialecticizes” five Moulène objects with five conceptual formations from the history of Western philosophy. Aristotle’s complex of matter and form is called to mind to describe the inner logic of a routed, hard foam sculpture. A bronze statue with holes next activates Plato’s notion of participation of the concrete world in the “injured Idea of the Beautiful.” A small metallic and incomplete “angel,” further, engages Leibniz’s affirmation that “everything that exists is composed of an infinity of things.” Badiou’s musings then bring him to Victor Hugo while considering a broken and repaired plastic chair. A terrible Hand made of concrete, that seems to have “burst out of the earth,” cannot help but manifest something akin to the Freudian unconscious. Finally, a large-scale “red and blue monster” awakens in the philosopher the rudimentary mechanisms of the Cartesian cogito, the famous “I think, therefore I am,” with stunning inversions and variations.

Badiou refrains, of course, from claiming that Moulène thinks about any of these philosophers when making his specific works. What he points to, however, in this richly illustrated bi-lingual volume, is that the artist and his art are “on the side of philosophy.”

“Being on the side of philosophy,” says the author, “any one of Moulène’s objects is always, by itself, and beyond the secret process of its realization, a material proof, which is met with a contemplative pleasure, the pleasure of the possible existence, here and now, of new truths.”