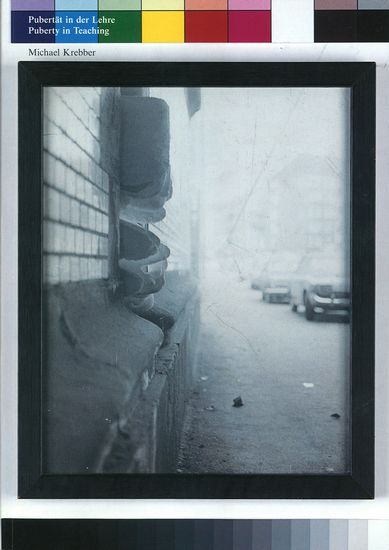 This catalogue is published on the occasion of the exhibition Michael Krebber, Pubertät in der Lehre / Puberty in Teaching.
Kölnischer Kunstverein, 21.06.2008-30.09.2008

Michael Krebber (born 1954) is one of the most influential artists working in Cologne. He became known in the Eighties and Nineties as the antithesis of the positions represented in Berlin and Cologne by painters like Baselitz, Lüperz, Kippenberger and Oehlen.
Michael Krebber was always viewed as a painter with a conceptual orientation. This label is applied to an oeuvre in which he has for more than 25 years been testing out the frontiers and possibilities of painting, without his work itself always appearing in the form of painting. However attributing him to conceptualism diverts attention from the purely formal qualities of his work. The question arises of whether Krebber uses this type of attribution simply as a trick for his work at certain times, in which grasping or outreach and simultaneous rejection, false bottoms, dead ends and illusions are everywhere immanent.
The catalogue too forms a central part of the exhibition, with texts by Alex Foges, John Kelsey and Tanja Widmann, and a series of more than eighty reproductions of Michael Krebber’s older drawings.