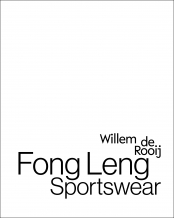 Fong Leng (1937) was an important couturier in the Netherlands during the 1970s and 80s, designing unique garments for affluent individuals. From the mid 1980s she democratized her craft, producing sportswear both under her own name as well as with commercial partners from Levis to Dutch discount supermarket-chain VOMAR. As in her early works, a host of cultural references informs these designs. Today Fong Leng handcrafts elaborate leather folding screens.

This catalogue lists over seventy items from Willem de Rooij's collection of Fong Leng sportswear, illuminating this sparsely documented phase in Fong Leng's oeuvre. It is being published on the occasion of the exhibitions The Impassioned No at Le Consortium, Dijon (2015) and Entitled at MMK2, Frankfurt am Main (2016)