As a representation of natural inanimated objects in a Greek Epicurean manner, recuperated by Christian  symbolism (appearance of vanitas), the still life incarnates overall the bourgeois and Realist painting of the 17th century. For a while it was considered the lowest rank, not to mention vulgar, in the hierarchy of academic art, it was rehabilitated in the 19th century and especially in the 20th century by the Cubist avant-garde, but also by the Surrealists. A 1956 painting emblematic of the nuclear mysticism of Dali (and preserved at the Dali Museum of St Petersburgh in Florida) carries the title Still Life - Fast Moving. In this painting, we find levitating several motifs addressed in the present exhibition, in a purely coincidental manner.
(cf http://www.allposters.fr/-sp/Nature-morte-vivante-Affiches_i324253_.htm).

If the still life remains a synonym of easy painting, commercial, seductive, and ambiguous (cf. the oysters of Reena Spaulings from a photograph of Roe Ethridge), it appears also as the antecedent to the readymade. The arrangements of flowers in a contemporary ikebana, is revisited by Reena Spaulings (the painting of a  bouquet prepared to be given as a present.) We come across it more concretely in the sculpture by Willem de Rooij  (who does not ignore the Flemish still life tradition and brings together two different tulip species in symbolic antagonism in a bouquet constantly being renewed to prevent withering). On the other hand,  Jean-Luc Moulène has “denatured” a variety of plants encountered in a French village. By placing a colored  background behind each one, he has shot them like portraits in a studio.

It seems as if photography is a medium made for the still life. The photographic frame can isolate  “compositions” found in nature, where the human eye – and not its hand – has intervened in the composition  (Gabriel Orozco or Anri Sala). One can say as much for the abstract realist works by Wolfgang Tillmans. With Andy Warhol, his stylized drawings, initiated from a staged and photographed composition serving as a  preliminary step for the artist, are on one hand, works by themselves, and also an intermediary step towards the mechanical reproductions of silkscreen printing.

Conversely, other artists recompose real nature with symptomatic materials: Adriana Lara creates a plastic fruit excessively enlarged (an “accessory” for a film). Molded, frozen (not to mention sexualized) in cement, the  composite and urban still life of Moulène incarnates the image itself of photography.

And other artists use live raw materials to make still lives : Reena Spaulings immortalizes the ghostly traces of an art opening diner on tablecloths becoming tondo. Tony Cragg revisits nature and recomposes a tree from  manufactured wood, both used and abandoned. Wolfgang Laib collects by hand pollen produced by flowers, which he then develops into active sculptures (Mountains of Pollen) or potential state (Bowls of Pollen).  Iridescent, the petrol oil stain mixed with water of Allora & Calzadilla become emblems of its conflicting global reach.

Finally, Richard Long proposes a conceptualized still life: on a vertical axis, a column of words evokes a  landscape composed from all objects that meets the eye while in a 360° panoramic view. 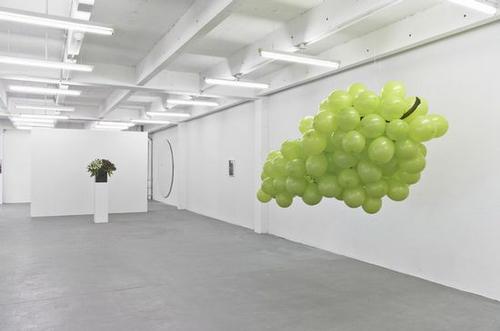