Throughout these recent works, Hatoum pursues her reflections on intimacy and domesticity, as well as the experience of exile and conflict, themes that have motivated her practice for the past thirty years. The works in this exhibition create a very personal landscape that reveals the breadth of the artist’s work in terms of scale and material, ranging from large installations using glass and steel to small works on paper that incorporate her own hair.

Cellules (2012-2013) is an installation comprised of eight cage-like structures made from steel rods, normally used to reinforce concrete. The sculptures are approximately human-sized and enclose organic forms made of blown red glass within them. The polysemic title Cellules refers to both spaces of incarceration and to the smallest components of living organisms and has several possible layers of meaning. These geometric, steel grids, which contrast sharply with the fragility, transparency and rotund shapes of the glass forms within them, suggest imprisonment but also the urge for freedom.

In the same room sits Turbulence (2012), a work composed from thousands of transparent glass beads placed in a square on the ground. The undulating surface of these beads of different sizes creates an impression of boiling water or cells. A tension is born from this writhing and irregular movement, suggestive of natural phenomenon, and the formal limits of the perfect square that contains them.

Several wall works complete this landscape where minismalism and organic forms converse with each other. For Projection (velvet) (2013), the surface of a piece of silk velvet has been treated with a laser to create a map that depicts the Peters' projection of the world. This cartography is a representation of the world based upon the real size of its continents. It is a work of reversal: the land masses have been created with the removal of fabric, so that they appear as burnt areas, whereas the intact fabric represents the seas and oceans.

The installation Electrified II (2010) consists of perforated kitchen utensils (sieves, a vegetable mill, a grater), suspended from the ceiling and attached to a lightbulb plugged into an electric current. Any visitor touching the work would receive an electric shock. Domestic objects become a source of danger.

Hatoum has used hair throughout her career and here she has incorporated it into several small works on paper. Hair and there (2004) is a diptych of etchings where the strands of hair are placed directly onto the etching plate to create abstract patterns that appear both random and composed. The artist has also created a series of works on handmade paper which incorporate not just hair but also other corporal elements such as nails or body hair.

This organic matter is also a regular motif in Hatoum’s sculptural work. Hair is associated with sensuality and femininity but once detached from the body, it becomes abject. Hair Necklace (wood) (2013) is a new version of Hair Necklace that was presented at the gallery in 1995. At first sight the work looks like a simple string of beads but, when close-up, we discover it is made from small hairballs. This link with the body of the artist and with the evocation of religious relics, for which hair were precious remains, makes the work a strange and fascinating object.
For Hair Mesh (2013), Hatoum has knotted and woven together human hair in three shades of brown, to create a minimal grid; an organized and precise pattern that vividly contrasts with the instable and organic material from which it is composed.
In the photograph Van Gogh’s Back (1995), the presence of hair makes us smile: curls that recall Van Gogh's painting Starry Night are created by the movements of a hand lathering soap on the hair covering a man’s back.

Reflection (2013), which lends its title to the exhibition, is another delicate work that plays upon transparency and lightness. A photograph of the artist's mother sewing, taken in 1948 in Beirut, is printed on three layers of tulle. This technique gives the impression of three dimensions and movement; the subject seems present, just as it fades away.

In the glass-roofed room, two installations demonstrate the artist's ability to manipulate everyday objects and embue them with a troubled and disturbing nature. Two straw hats are placed on a public bench. On approach, we notice that they are woven together. Underneath the lighthearted appearance of Cappello per due (2013) is a suggestion of ambiguity and a questioning of cohabitation, as well as of the reassuring and onerous nature of relationships.
The work Untitled (coat hanger) (2013) consists of a coat rack that has a wire coat hanger and shopping bag hanging from it. The hanger has been distorted and shaped into the outline of the historical map of Palestine, and the shopping bag has been made out of a shredded, printed Arabic map of Palestine. In this work, the artist subtly addresses the status of her parents' country of origin and the fragility of its frontiers.
YOU ARE STILL HERE (2013) is a small mirror that brings the visitors back to their existential reality, making them face their mortality in an unavoidable way.

The exhibition Reflection reveals a universe filled with metaphors and visual acrobatics that questions, in turn, its intimacy and order. The alliance between lightness and strength in Hatoum's work provokes a surprising shift that echoes, with much finesse, our relation to the world. 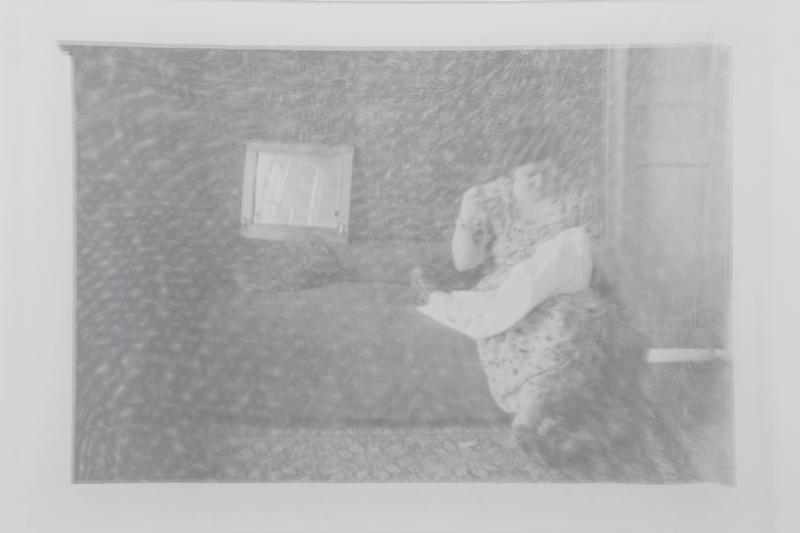