For his sixth solo exhibition at Galerie Chantal Crousel, Rirkrit Tiravanija presents a new set of works, textiles and marbles.

Made from the purest tradition of weaving, Aubusson rugs displayed on walls and floors will serve as surfaces conveying the artist’s new slogans. At the crossroads between political activism and commercial marketing, the words are set out on U.S geographical maps referring to the ones Jasper Johns made between 1960 and 1965. Other texts overlap the United States’ flag – as Jasper Johns depicted it from 1954 – in a series of unique marble works, creating both echo and tension, eternally engraved.
Rirkrit Tiravanija discussed the exhibition’s concept with the art historian Jörn Schafaff.
You can download the full version and floorplan here.

—
Jörn Schafaff: It's summer 2020, the world is affected by a global crisis, the Covid-19 pandemic. The United States, the world's most powerful nation, has proven to be badly prepared and poorly equipped for dealing with both the direct thread to its people's health and the social and economic challenges caused by the virus. Moreover, four years into the government of the current presidency, the country is on the verge of cultural, social and political bankruptcy – a development that affects not only the people living in the States, but the whole planet.
This is the background against which your current show at Chantal Crousel is set. You designed rugs referencing Jasper Johns' famous paintings of the map of the United States, and marble slabs which take up Johns' series of the US flag, adding slogans of various kinds to both of them. By this, the exhibition seems like a direct comment on the current situation.

Rirkrit Tiravanija: I know, and that's why I really wanted it to be out now. At the same time, however, it's something I've been thinking about doing for a while. I've been working with the flag in other materials. In a way, for me this goes all the way back to when I was working with Gretchen Bender. (Rirkrit Tiravanija used to work as her assistant in the late 1980’s).
Artists were protesting Ronald Reagan's invasion of Central America. Gretchen made a video animation deconstructing the American flag as part of her multi channel installation “Total Recall” (1987). She had recognized that in sports broadcastings the American flag was shown to announce breaks and then dissolved when the game restarted. She isolated that moment and inserted it into her video collage. (…)  Also around that time I think there was a student at the Art Institute of Chicago who burned the flag as part of a performance. This caused a huge scandal. But people forget that it is part of political speech, part of enacting your right to critique. (…) So, this idea of deconstructing the flag has been going on since the 1980s, since Ronald Reagan. Or even for longer, since the Vietnam war protests. Of course, as an artist thinking about the flag you also have to think about who has worked with the flag before. Obviously, Johns has done it most prominently.

JS: But there is a difference between working about and deconstructing the flag and working with a Jasper Johns painting of the flag.

RT: Johns was doing a Duchampian readymade. This is what I think is interesting about it, using the flag as a readymade. At the same time it was also a pop icon. Pop Art basically is readymade art. Just that it is about using imagery rather than using objects.

JS: Johns chose motives such as the flag or the map for their iconic status — for being something “the mind already knows” as Johns once said about the American flag. (…). For your works in the show you have matched these visual icons with slogans. How do you understand the relationship between these two kinds of information?

RT: I usually describe my text works as road signs. Like when you drive on a highway and you drive by a big signage and pick up whatever the words are written on it. It's about whether that gets into your consciousness or not. (…) I always find it interesting how they suddenly show up in the middle of nowhere, totally out of context. You read it because it stands out, and it does have some effect, whether you agree with it or not. I'm interested in this floating attention — that and the phenomenon of so many people running around wearing t-shirts not realizing what it says on them, at least in Japan or in Thailand. I find that kind of parallel to each other.

JS: You have worked with t-shirts as carriers of slogans invented or chosen by you. More prominently, you have also placed them over canvases covered with pages from daily newspapers. (…)  What changes when slogans are displaced from a t-shirt or even a painting to marble?

RT: Well, it could be more interesting if it were actually put out in a graveyard and used, for basically the marble slabs are tombstones. (…)

JS: While preparing for this conversation I came across an article from 1964 in which Max Kozloff writes about the relationship between Johns and Duchamp. In one passage he sums up the congruences between their approaches to art, pointing out that Johns reversed many of the ideas he got from Duchamp. When I read this I was particularly struck by this one sentence, quote: “For one thing, in each instance the object is overpainted, or functions or relates directly to a pictorial passage. Johns, after all, takes the temperature of a painting, not marble blocks...” and so on. Are your flags reversing Johns as Johns reversed Duchamp? And if so, in what way?

RT (laughs): I didn't know this passage! But you are right, in a way I am reversing Johns. I am picking Johns for several reasons, one being: What's the reason for using that image of the flag or map? One reason is that it refers itself to a work of art. At the same time that work of art reverts back to something else. To make a stone flag is almost something normal.
(…) Everything in the show is based on the scale of Johns' works. And why do his flags have the scale they have? Because the American flag is like that.

JS: So you are following the same conceptual approach as Johns but revert it, firstly, by not referring to a non-art object but to a work of art and, secondly, by using a material that, unlike the paint used by Johns, directly refers to objects in the real world.

RT: Yes, I deferred the conceptual decisions to two things already existing. (…) It's also about chance, about giving up control, in the way Duchamp did.
(…) I see the marble like I see chrome. It is a material that in itself has a kind of void of time and space. The reflection of the metal for me represents a void in that despite its heavy physical presence it also produces an absence. It is absorbed by whatever it is reflecting. Marble like the one Michelangelo used is like a cloud, it's like air. That's why everyone is so interested in it: that in itself it disappears because it is not mere stone. I'm interested in that materiality or immateriality of the material.
(…)
JS: Let's speak about the maps, then. You had them made at Manufacture Pinton in Aubusson, a manufacturer of tapestries whose tradition goes way back to the 15th century. (…). Was that of any importance to you? Or why did you choose to do the maps in the form of wool rugs?

RT: For me the material is especially interesting in the computerized way the rugs are made nowadays. As you know, the computer itself developed out of this tradition.

JS: You're referring to Joseph-Marie Jacquard's invention of the programmable loom (…) The basis of the 0 1 principle of computer programming. But isn't there also a connection to your long-term interest in traditional craft?

RT: In some ways it's about the hand, as is the marble, for traditionally you would use your hands for both weaving and carving out marble. This connects to my desire at this moment in time to go back to very basic, handmade stuff.
(…) Regarding the tapestry, it might also have a relationship to my mother who just passed away. She used to knit, making sweaters and so on. Now I'm going to start to continue that in a way, continue her ideas. But generally speaking, it is just another material.

JS: The way you grouped the rugs in one room and the marble slabs in the other is striking in several ways: the vastness of one room is contrasted by the condensed atmosphere of the other.You already talked about the association of a graveyard, one could also think of a memorial hall. How would you describe the role of the mise en scène in your work?

RT: In this case what is interesting to me is that it really is a kind of painting and sculpture show while at the same time I wanted to create the impression of coming to a little grave site and walking through the landscape and pick up certain things in a poetic way. Note that the texts are there to be read in a certain order. It's about the bodily relation to what is there and about using your own experience to interpret what you are reading.

JS: Talking about the poetic dimension: given the circumstances of the time we are living in, the political dimension, or even message, of what we encounter seems to be quite clear. But at the same time, unlike one might expect from slogans, the texts are not political in a straightforward sense of the term, are they?

RT: No, and I think none of the texts I worked with have ever been politically straightforward, even if they seemed so. Again, it's more about how you have your own experiences of things and ideas and how you come across something that trips that up. The reason for not being too direct or even oblique is that I hope in this way the work can be more open to the lives of anybody else. “The Odious Smell of Truth” works everywhere. When I think about what I want to do or say, I do think about it in a bigger way.

JS: Has your relationship to the United States changed since you moved to New York in 1982? One the one hand many things have happened since then, on the other you became more of an insider.

RT: What happens here in the States partly happens because we let it happen, we let the country dominate all of us in terms of economy, even in terms of philosophy and everything because somehow everything is centered around what this country thinks and does. And this is not the right idea to do that. But I think I have felt this way ever since I arrived. The American dream was immediately recognized as a farce. But this also made it interesting to become an artist because it was a way to dismantle these things, at least for myself. That these things are here now in a show in Paris is because they affect everyone of us. 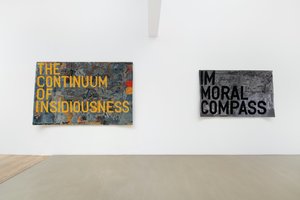 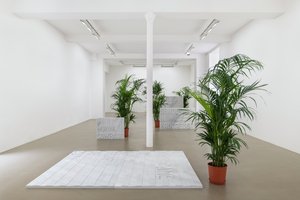 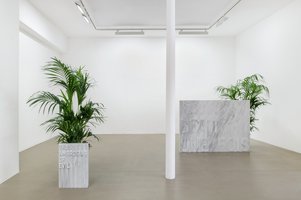 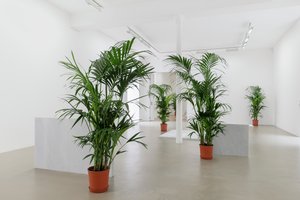 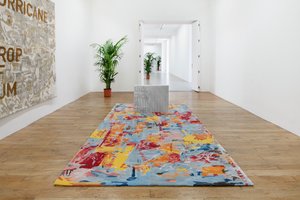 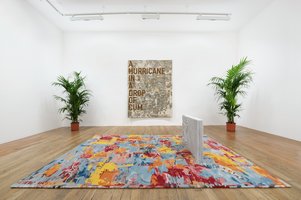 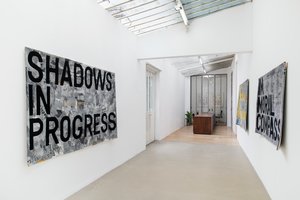 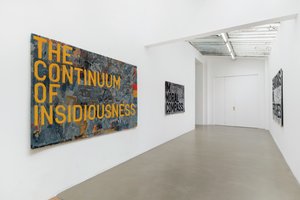 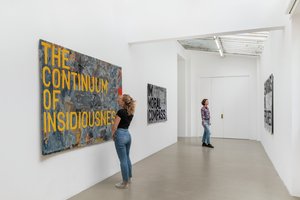 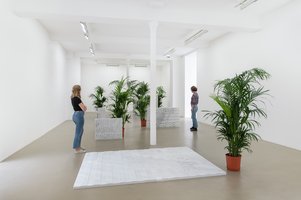 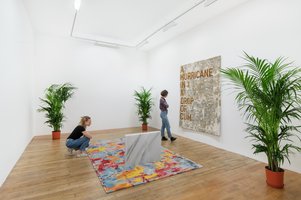 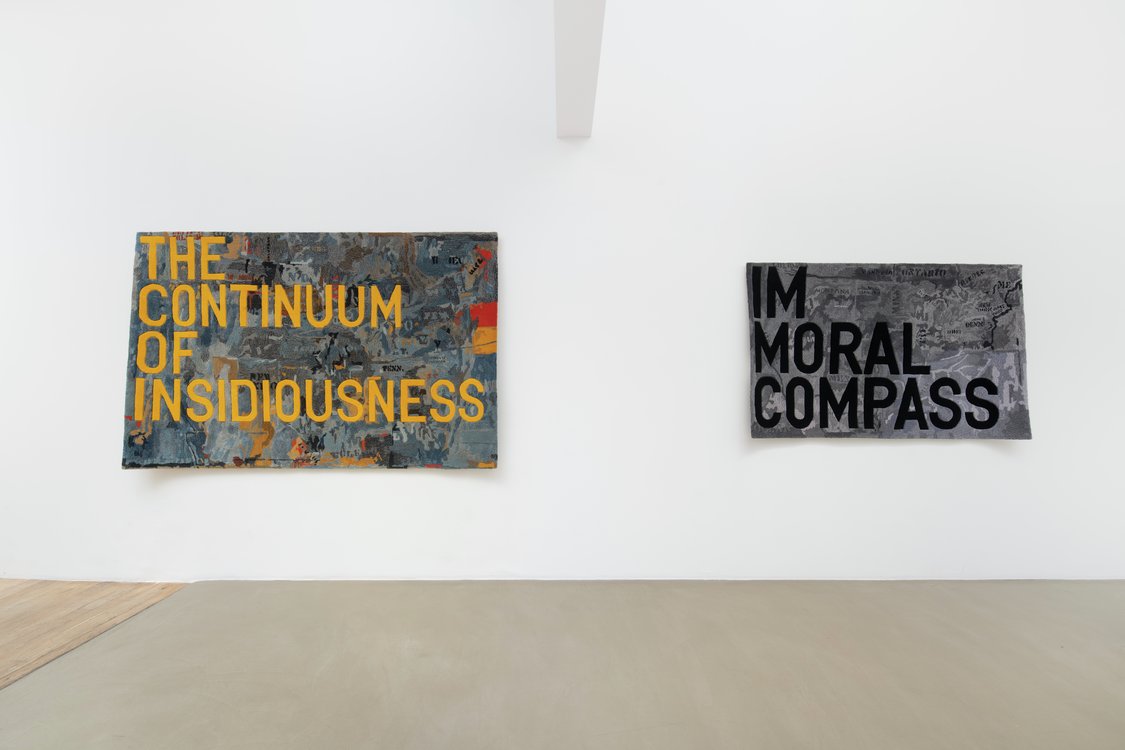 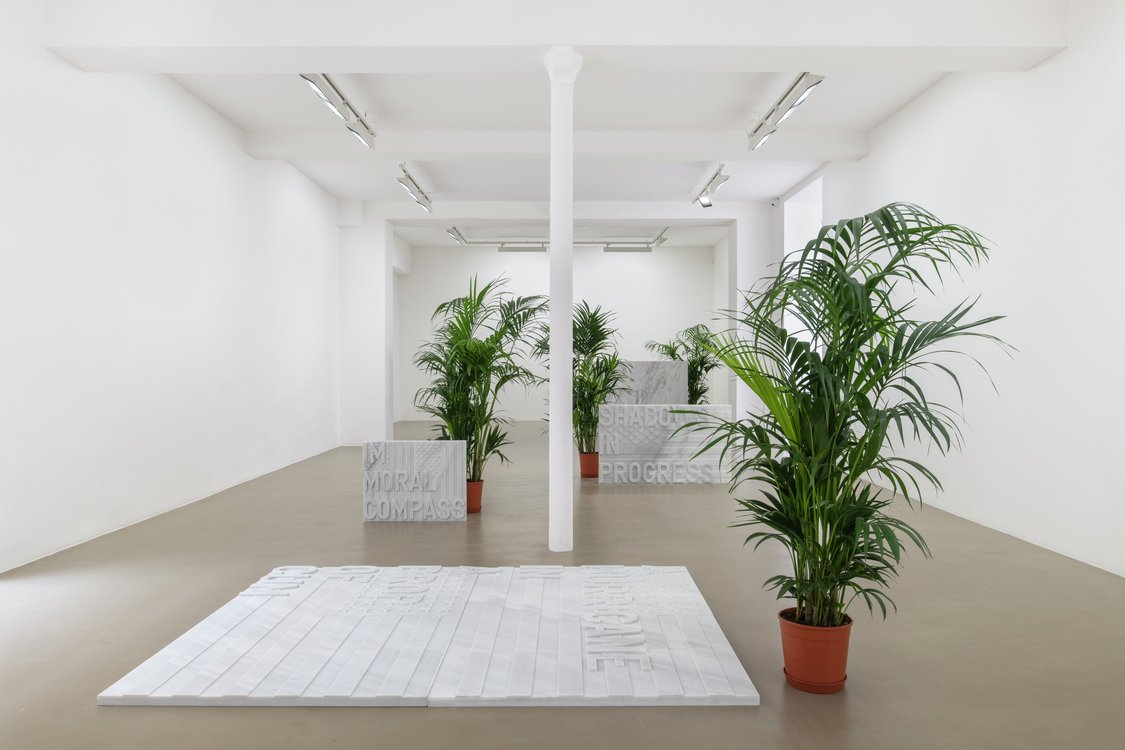 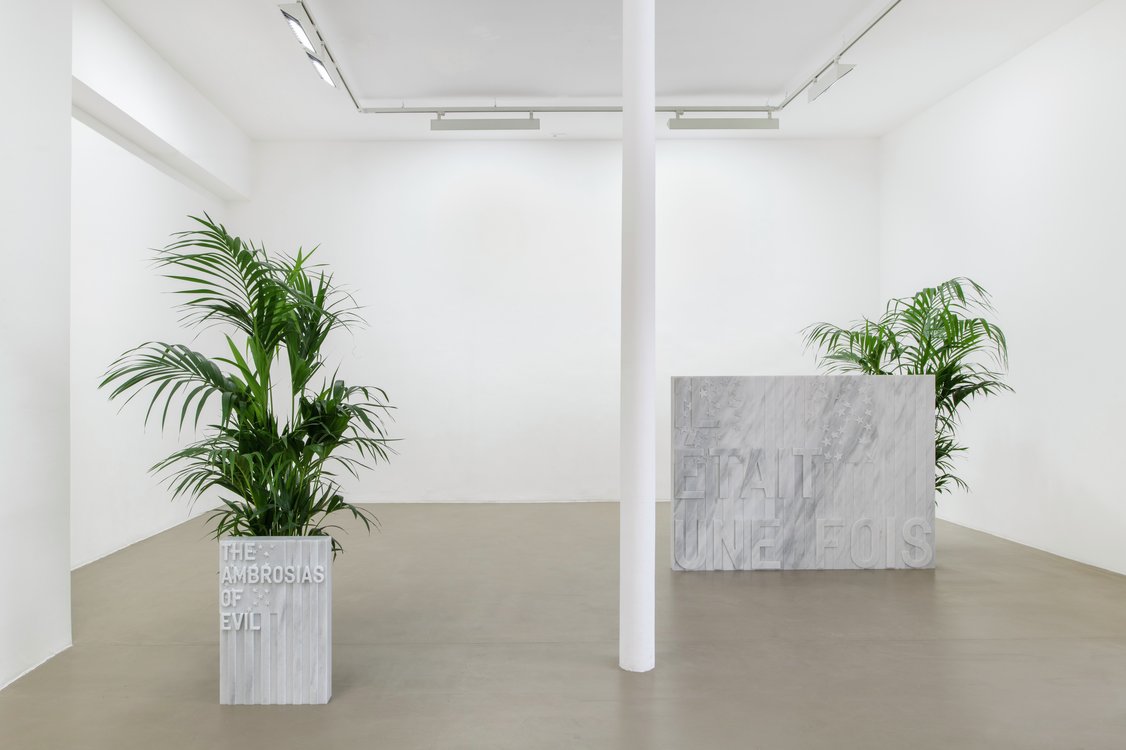 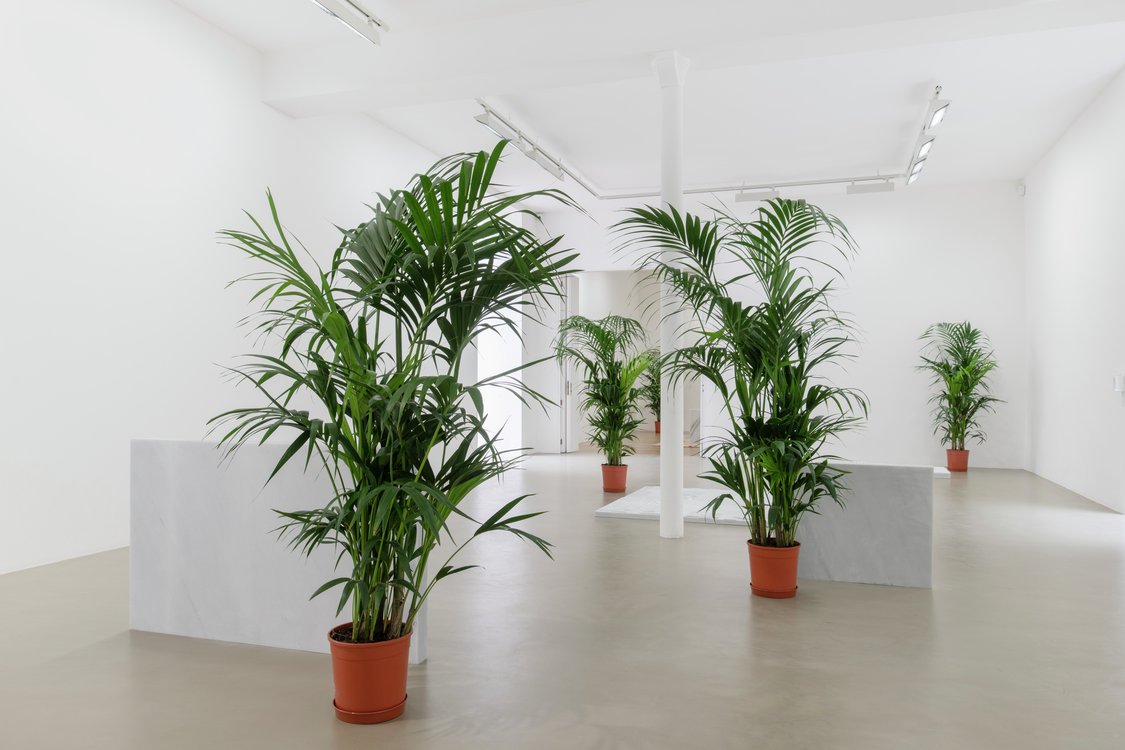 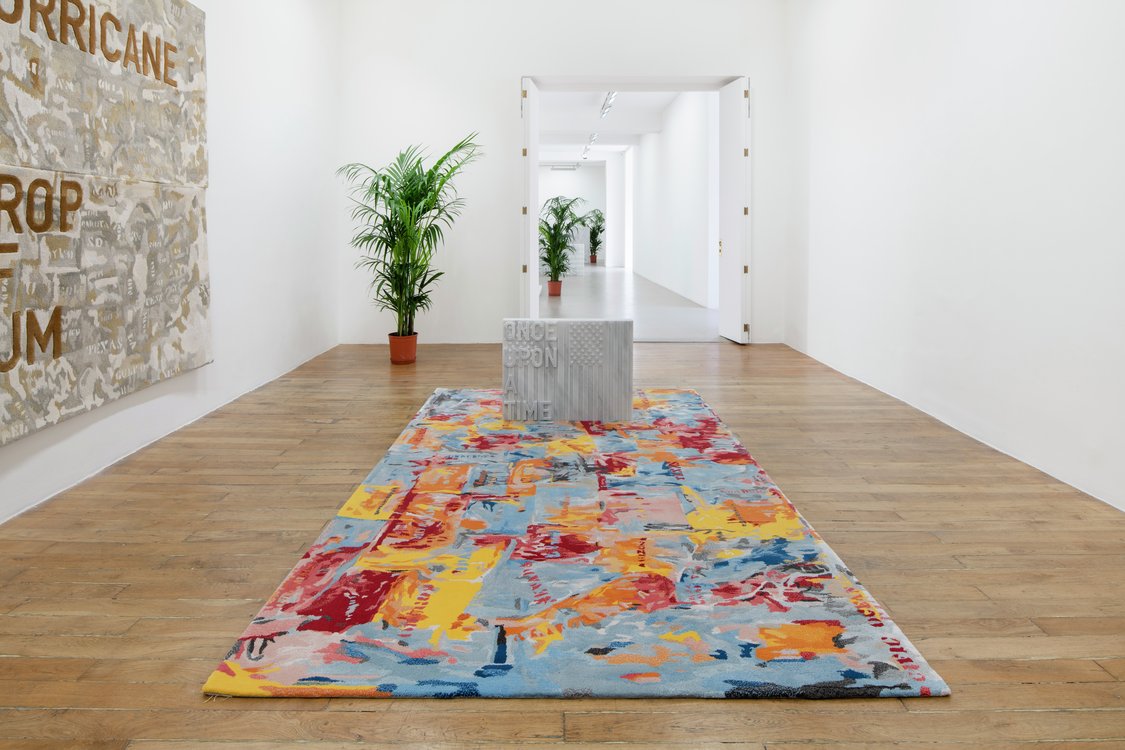 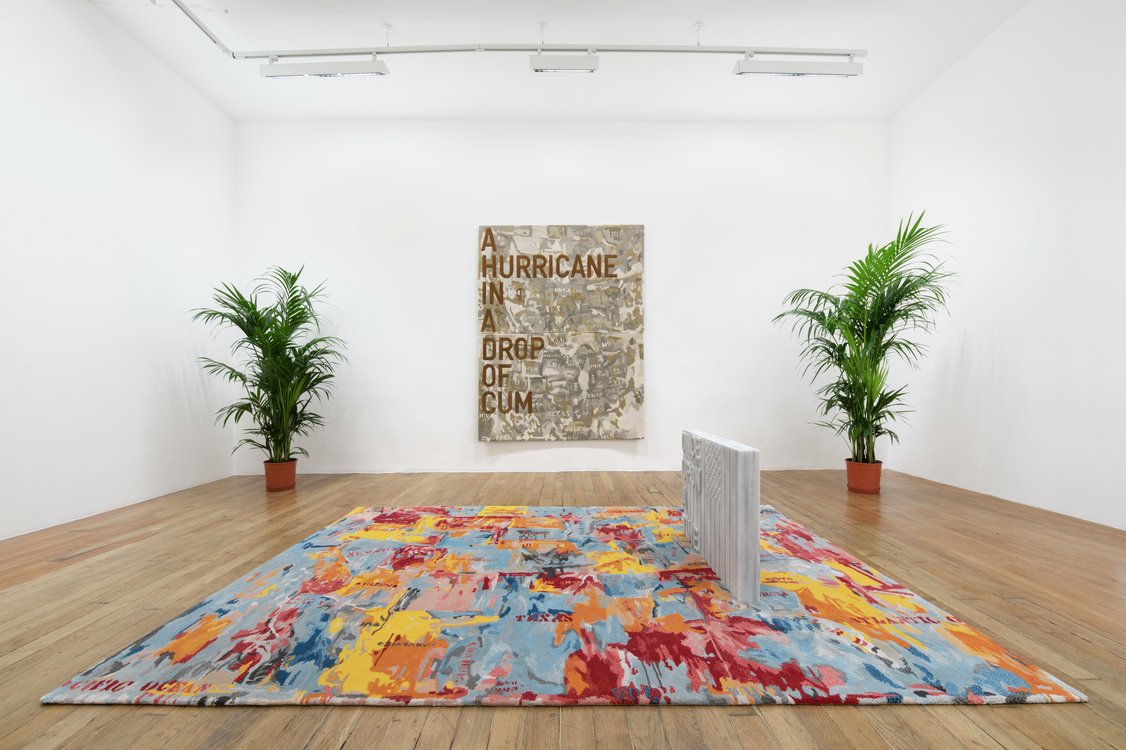 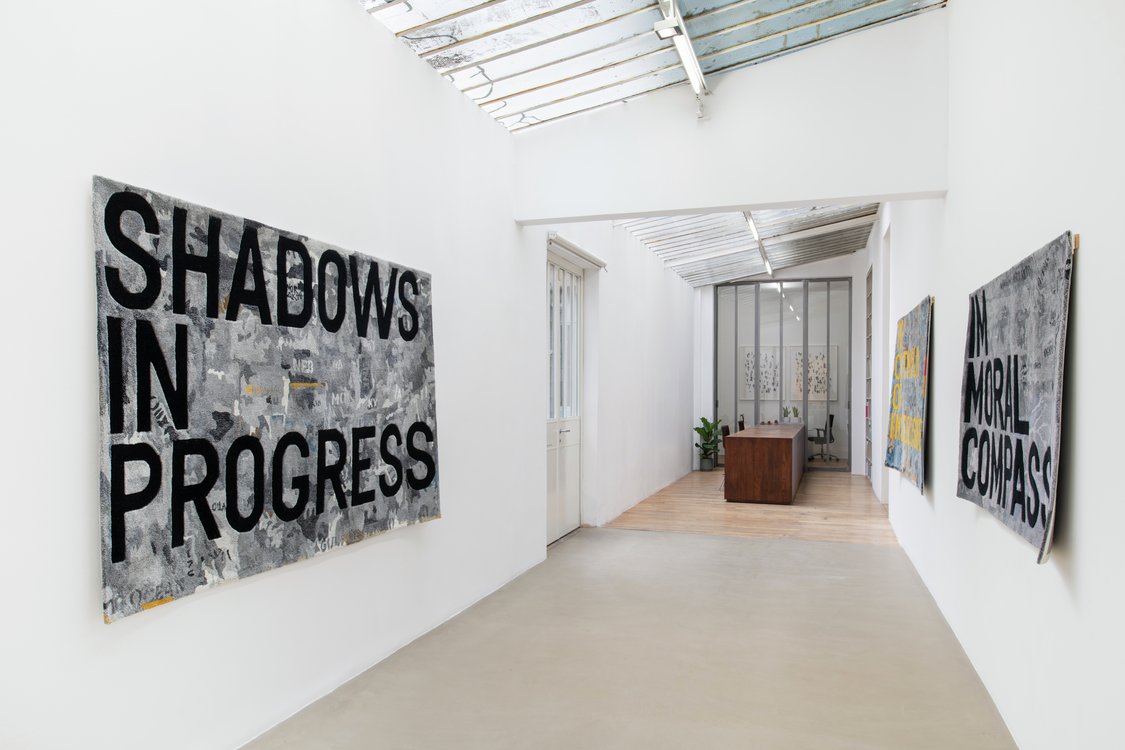 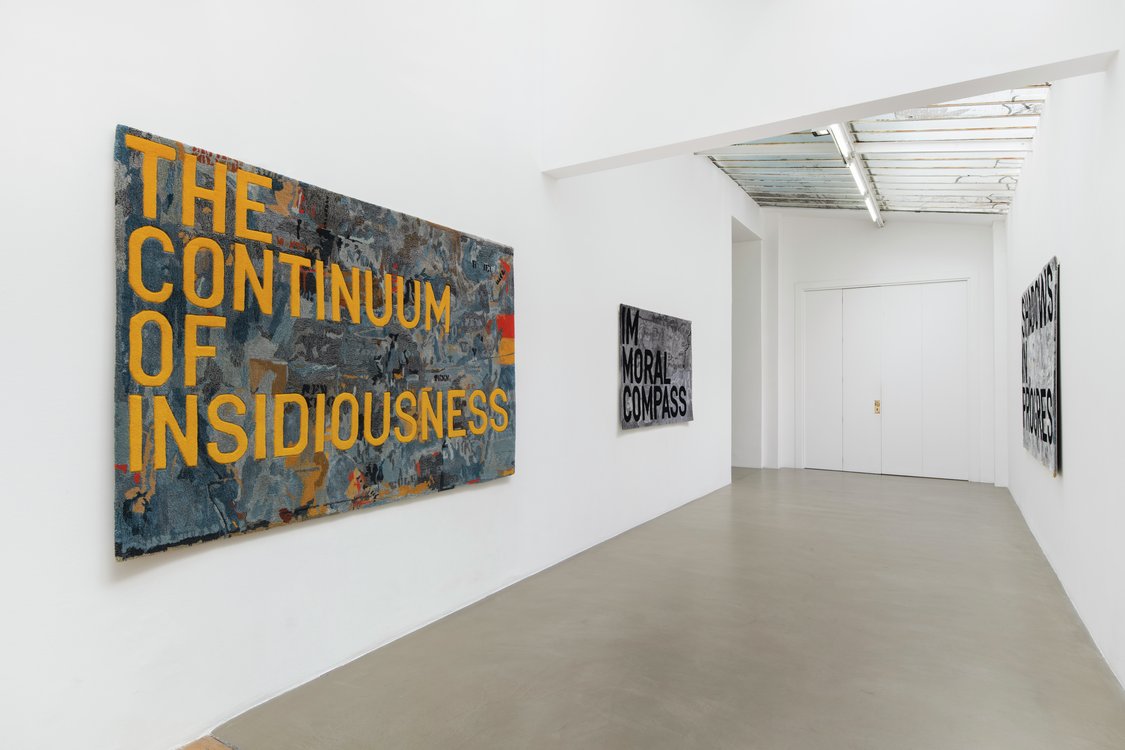 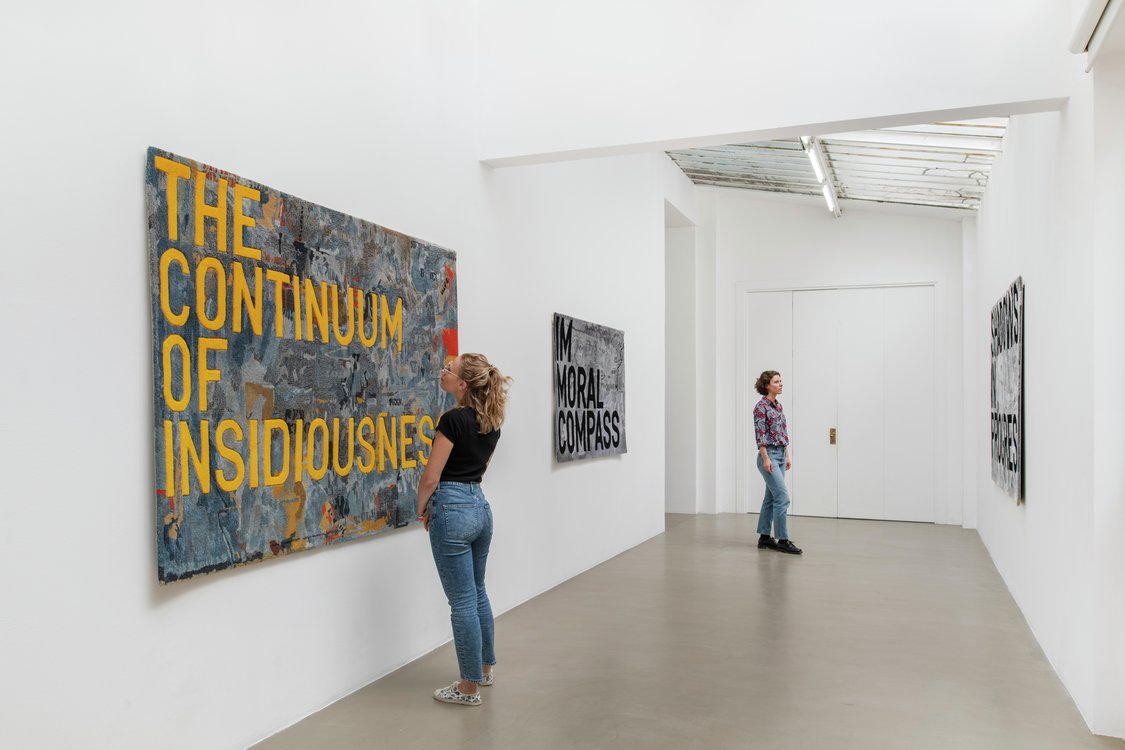 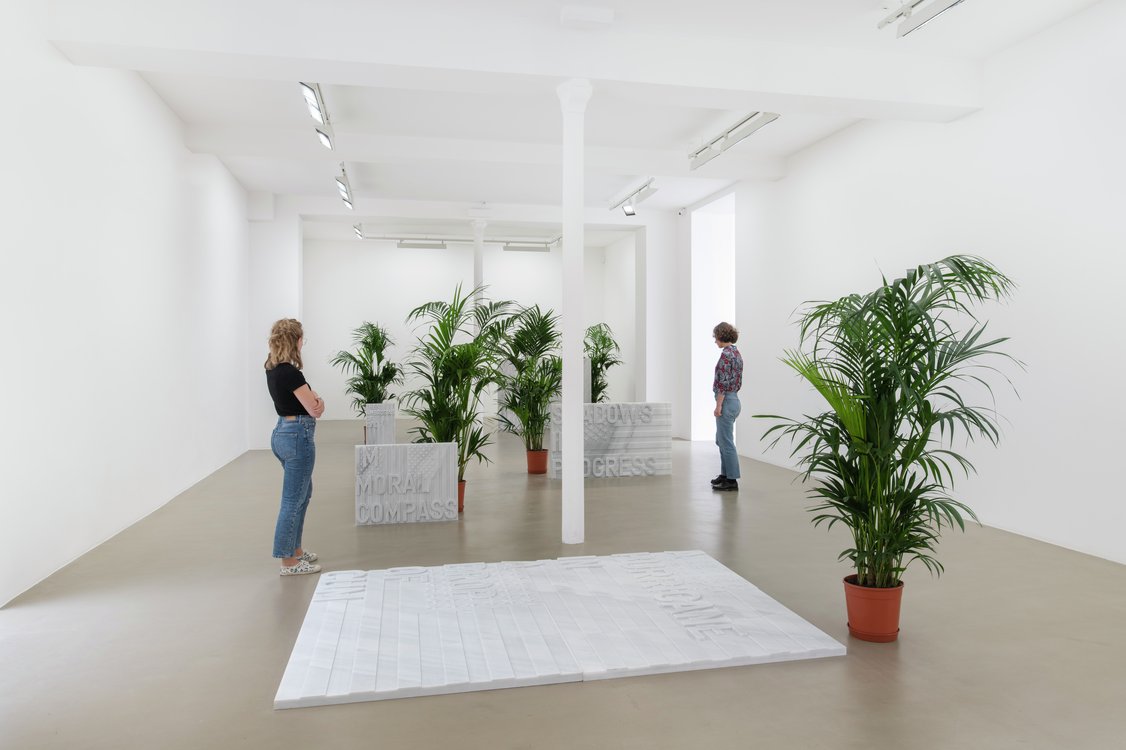 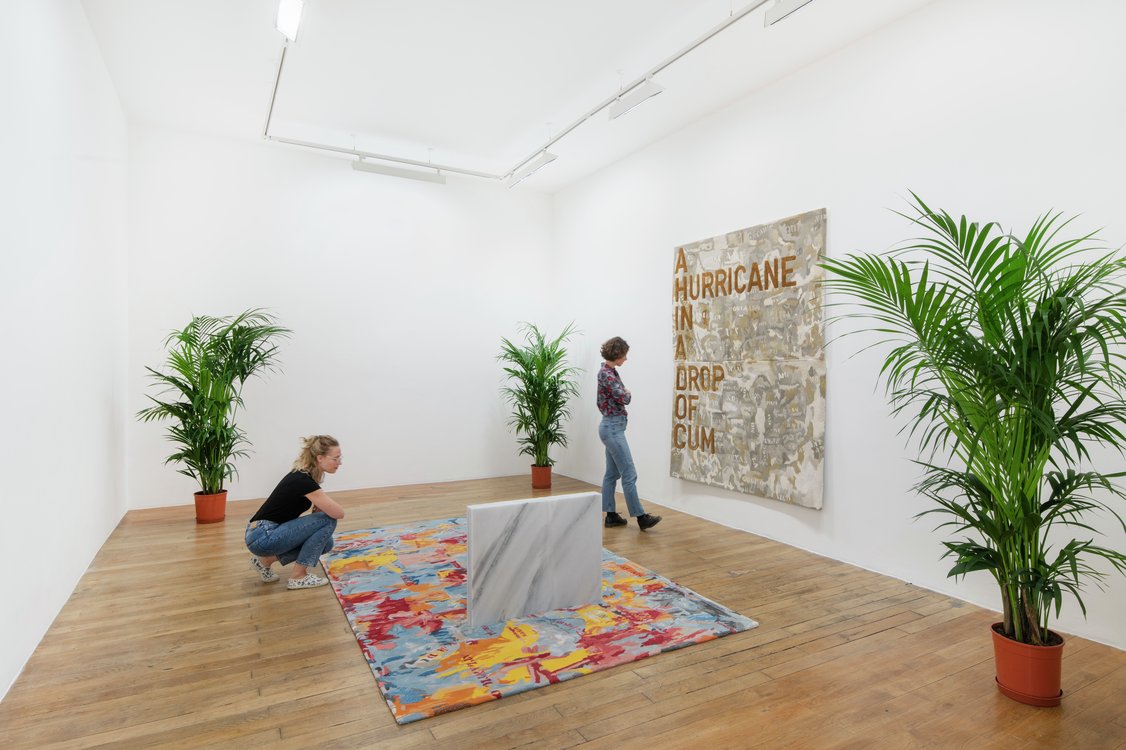