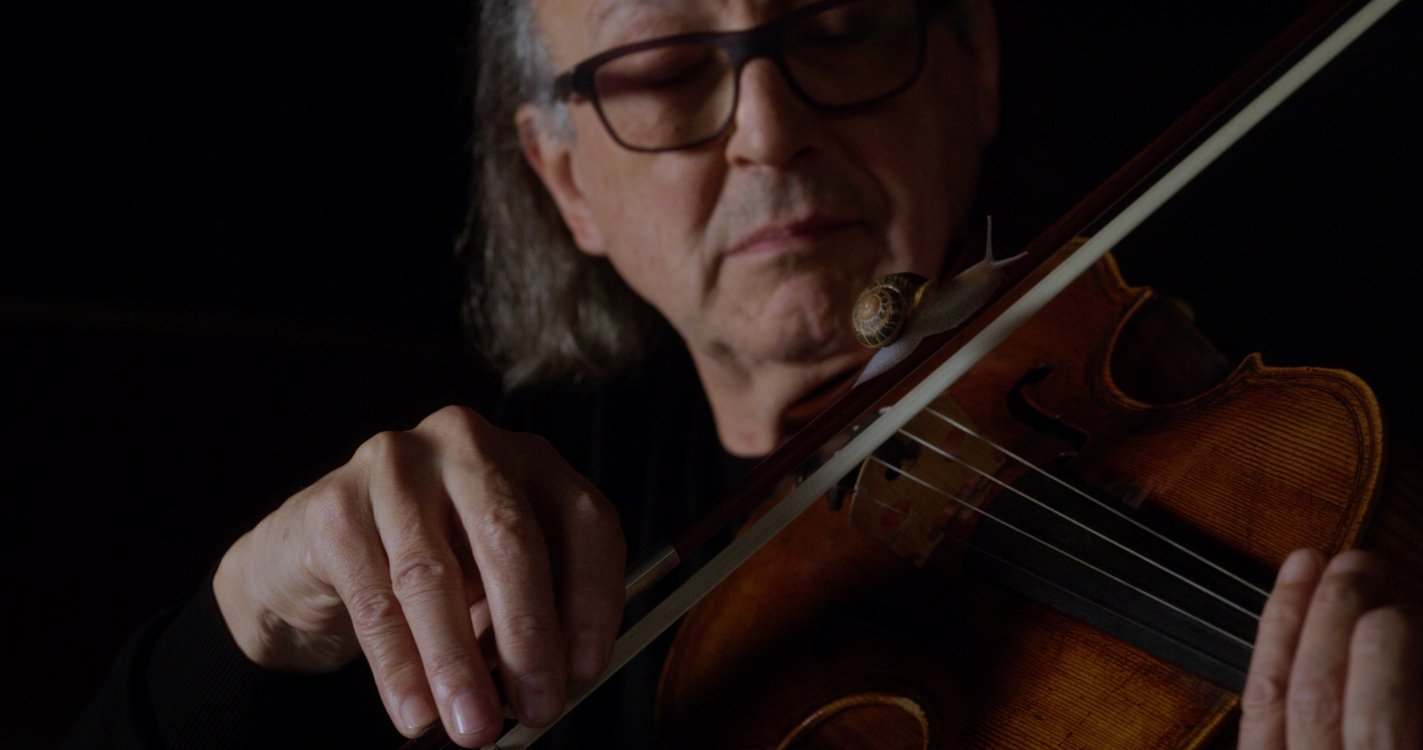 Beyond his inner, intimate ear for the music... which resonates with his own vibrations, the performer is confronted by the emission of what he hears in himself.

What gesture can I find to sing my inner music? Overall, this is a challenge to gesture technique.

It will be a set of gestures repeated a thousand times, blending an occasionally exacerbated sensitivity with the gesture that is precise down to the millimeter, in its finesse and purpose.
But also, to know how to listen to one’s own gesture, its inventiveness, to accept its reception when it reveals a sudden unexpected resonance.

The indefinitely solicited motor coordination of the arm, hand, of each of the fingers and their positions, is interwoven and even melted into the sensitivity that is refined into a form of the unsayable.
In just a few words, here is a sketch of the subtle mesh, beneath language, of the alliance, the alloy of physical sensations with the finest of vibrations, those of musical emotion.
Anri Sala invited me to place the vibrations that dwell within me as a musician in resonance with those of this strange guest: “my snail,” perched on my bow!

Will I say that I must have identified with my snail’s body language? Was I receptive to his accents? Pauses? Groping? Progression? Attentive to what he made me intuit, and feel?

I had to integrate all of his motion into my own instrumental malleability. At times, it was an acrobatic apprenticeship, forcing me to discover an inventive expression, questioning my receptiveness to listening to my own unusual movements, solicited and caused by “my snail.”

Undoubtedly, but nevertheless, this gastropod was flexible enough so that this Elegy, in its profundity, was not altered. I would even say, that, in a way, it was rendered even more sublime.

Have all of these mentions served to keep me beneath my true questioning: my personal alarm…

It is like a heartfelt cry, a groan of grief.

Alphonse Onnou, the wonderful violinist who founded the Quatuor Pro Arte, has passed away. His alter ego, violist Germain Prevost, turned to Stravinsky in search of an Elegy. In Greek, “elegia” means “Song of Death.”

A double-stopped score with two voices that are constantly intertwining, to produce a song of love and mourning: long, slow, insistent, penetrating the heart of the tragedy of a separation, the separation that makes presence even more absent.

Is the snail there to signify an indelible attachment, made to cling evermore... and when he moves, he leaves a silvery trail, a sign of his luminous presence…

Does the snail’s slowness attest to a suspense of time?

Another casts a shadow over my bow. Who?
He who is lost forever and yet always present…
This “Visitor of the Ego,” as Alain Mijolla, analyzing the inner presences that haunt us, called the ones Rimbaud sensed...
Always there, always missing.

Stravinsky returned to Russia after 48 years in exile. The many lost phantoms from this painful separation cast shadows on his Elegy.


Listen to the audio version