Galerie Chantal Crousel is pleased to present Slip of the Line (2018), a video by Anri Sala. The film invites us to a strange journey following the production line of a glass factory. Anri Sala uncovers this fascinating work with his own words.

"Slip of the Line follows the shaping of matter in a wineglass factory, where glass is transformed from a glowing molten state to transparent, solid articles, as it moves from one post to the next, through an orchestrated series of artisanal manipulations.

The journey of the material follows its ‘natural’ course until, unexpectedly, a magician bends the now solid stems of the wineglasses through an eerie series of hand gestures and ‘eye contact’ with the matter. His acts of magic transcend the workflow of an assembly line, redeeming the goods from their prescribed form and function."

"Daydreaming the factory as a complementary libretto, where the magic of work meets the work of magic, Slip of the Line muses with the idea of teasing and twisting the paradigms of progress and its professed curve of advancement. It’s as if, intuitively, it uses its share of magic to expand the physical limits of matter, in the hope – or belief – that one could consequently extend the bounds of the world." 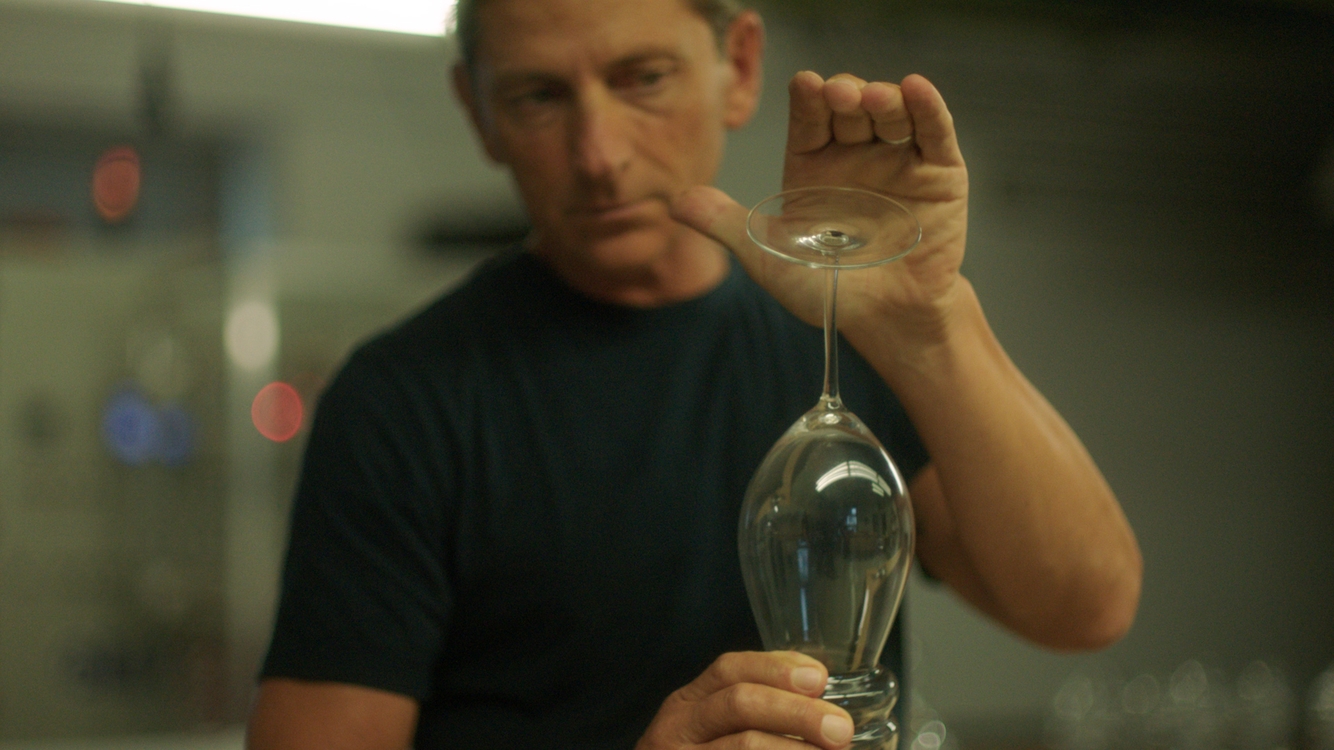 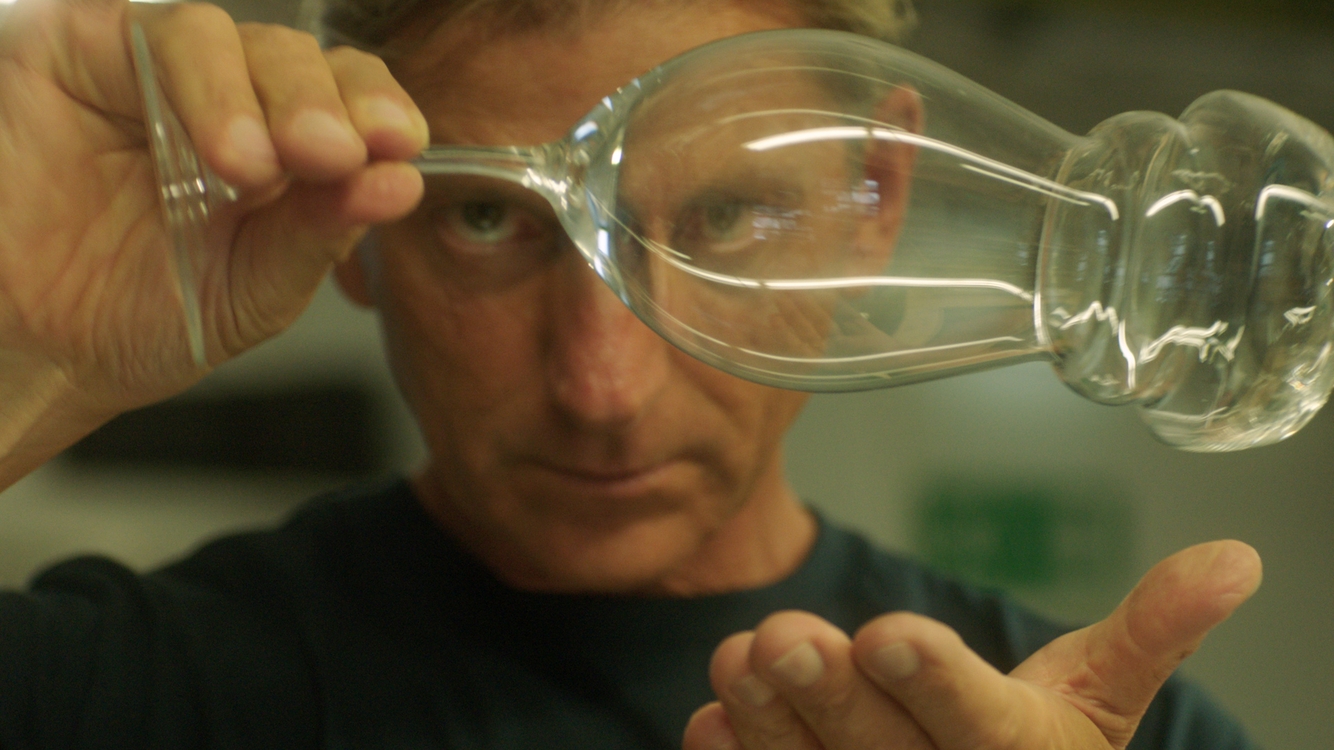 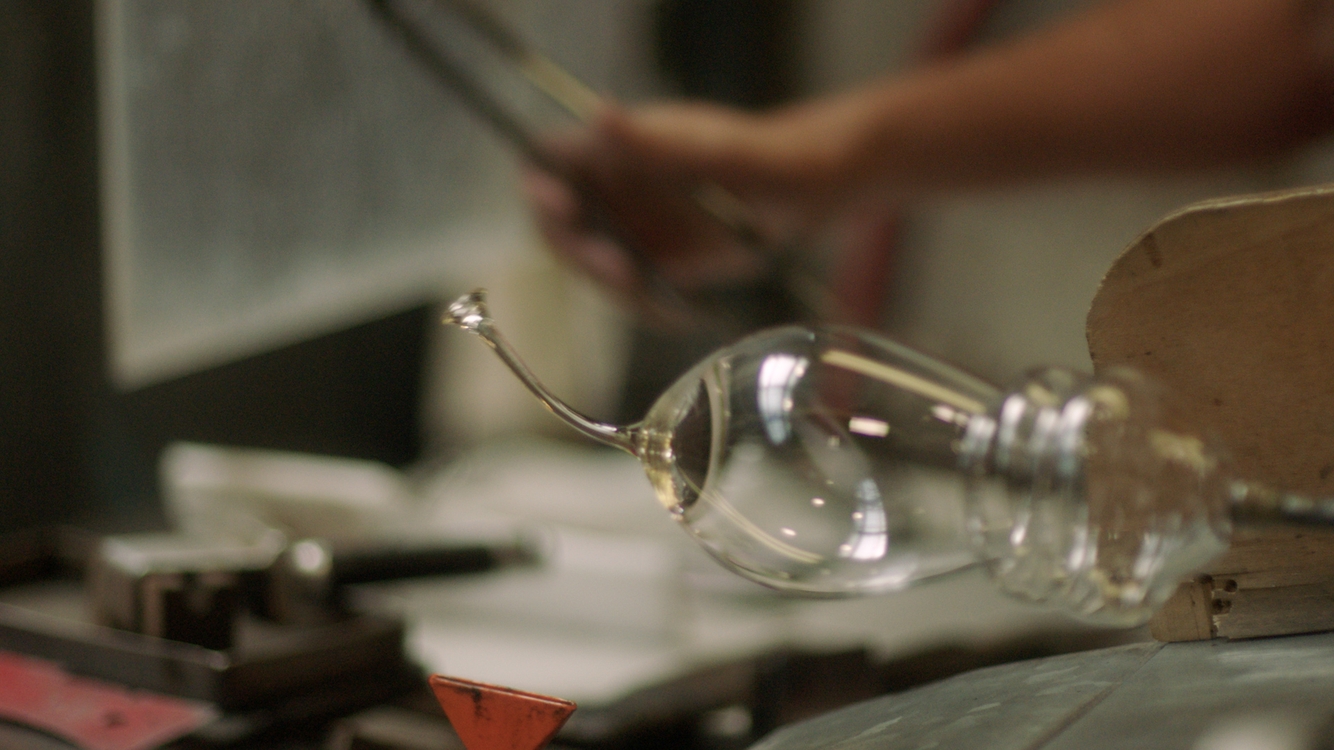 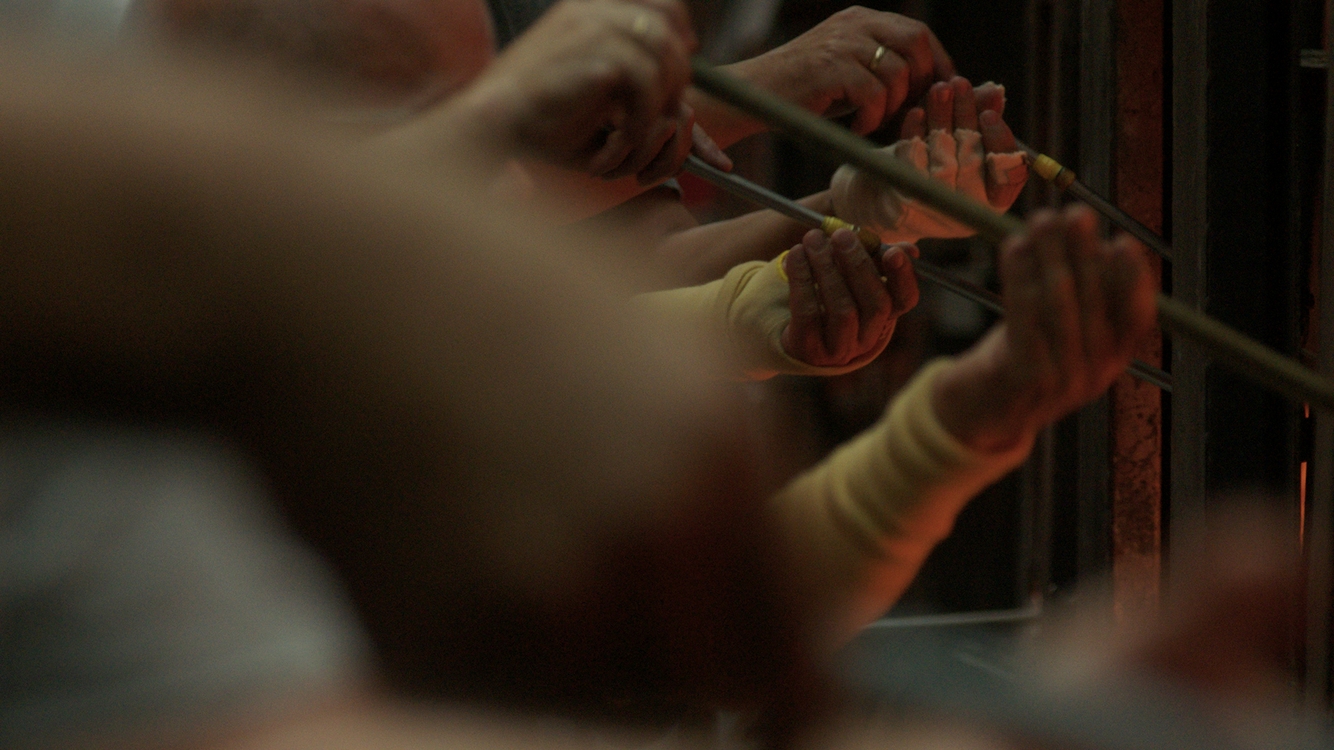 "By introducing the magician into the heart of the production process, Slip of the Line grants it traits of an enchanted, otherworldly realm. Rationality, physical laws and economic efficiency recede to allow the process a degree of lyrical unknown. The assembly line resembles a sentence that is drifting away from its intended meaning, having stumbled on a slip of the tongue."

"Back in the factory, as they pursue their journey through the assembly line, these unusual glasses elicit nuanced changes to the existing workers’ manual gestures and the automated machines’ actions. This allows quasi-automated gestures to embrace a new transient quality of choreography and bestows on the machines an air of ballet mécanique. Responding to the new shapes makes the workers’ movements seemingly more human, as they have to individually grapple with the bowing of each glass." 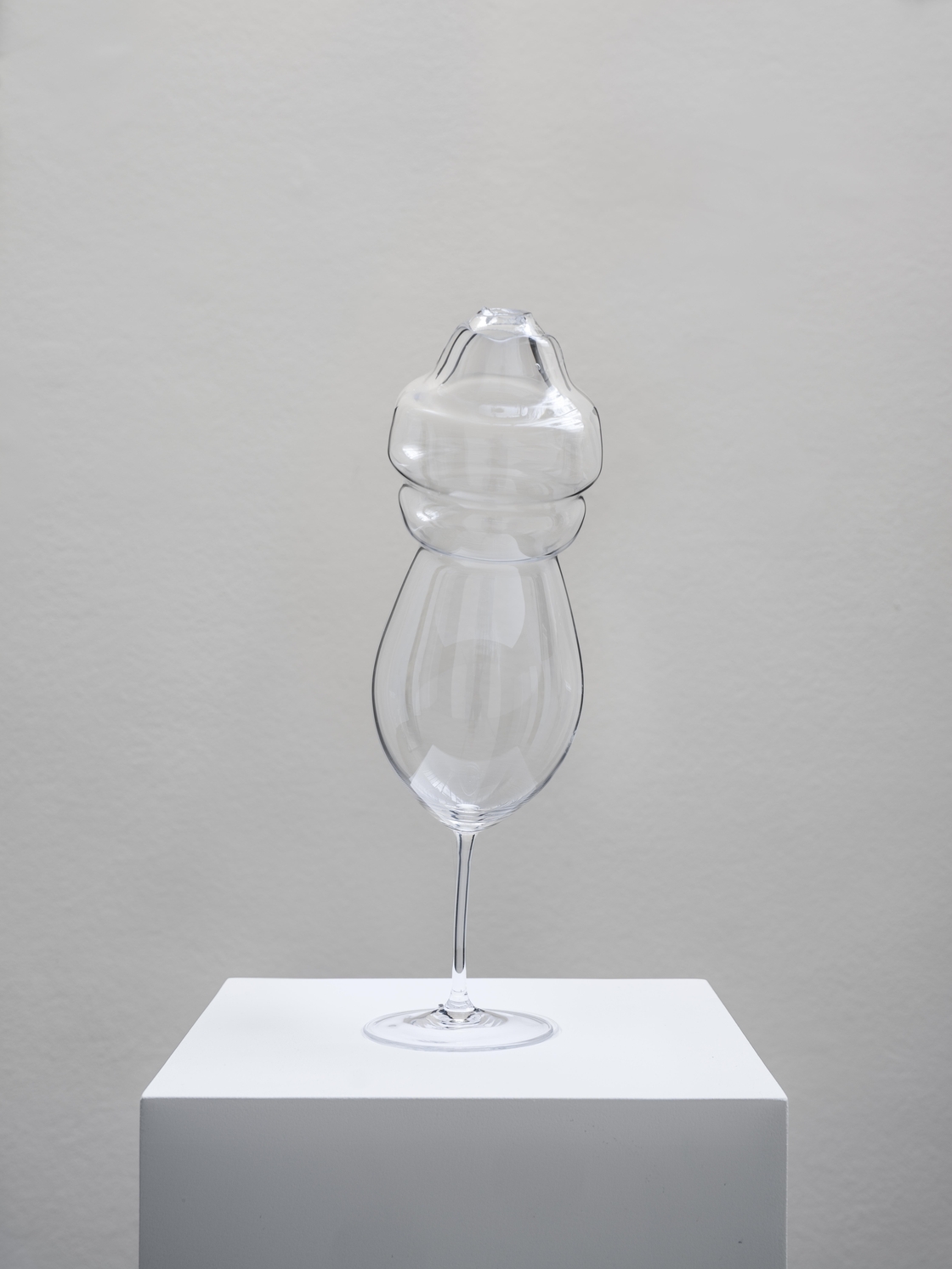 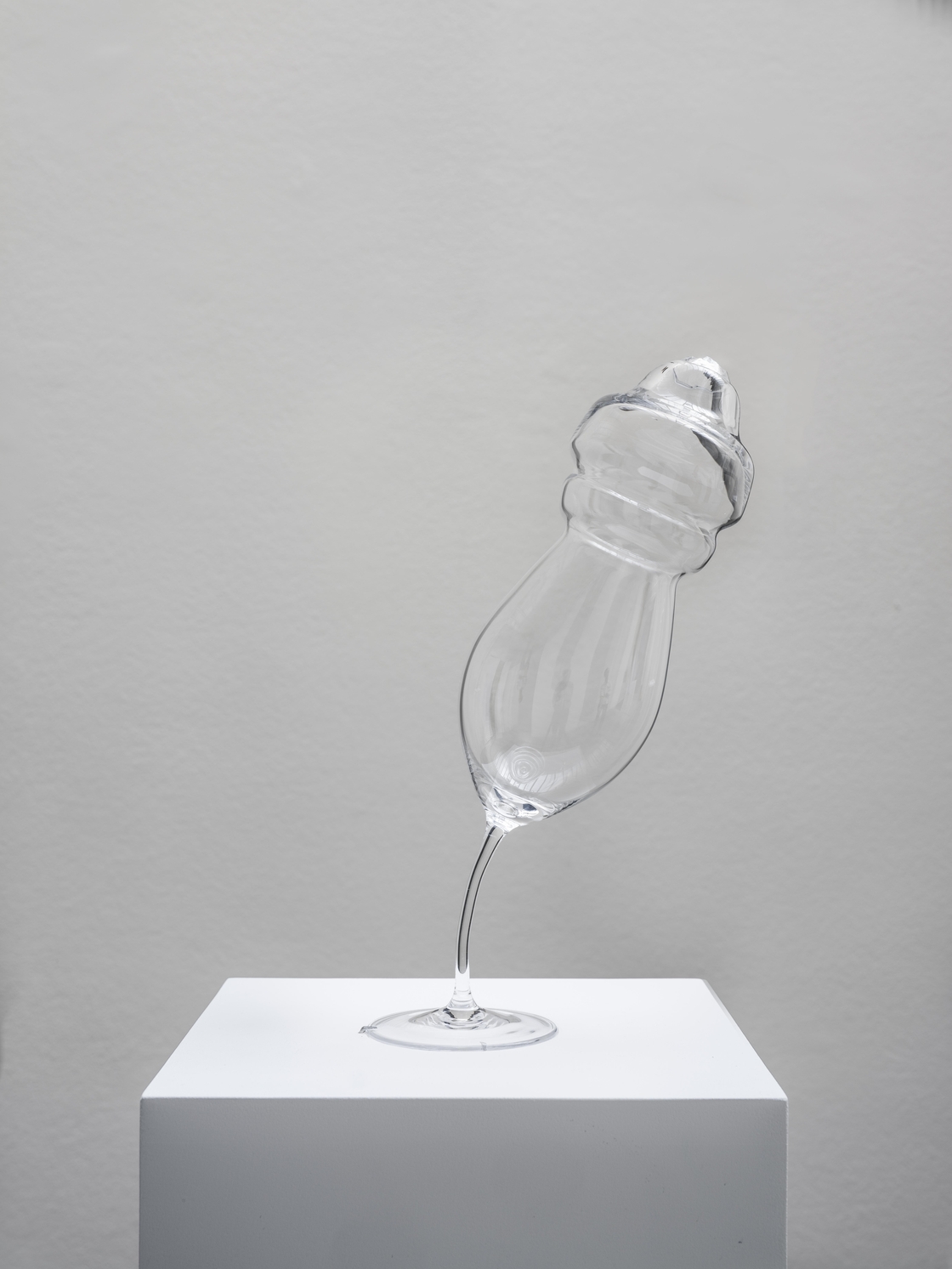 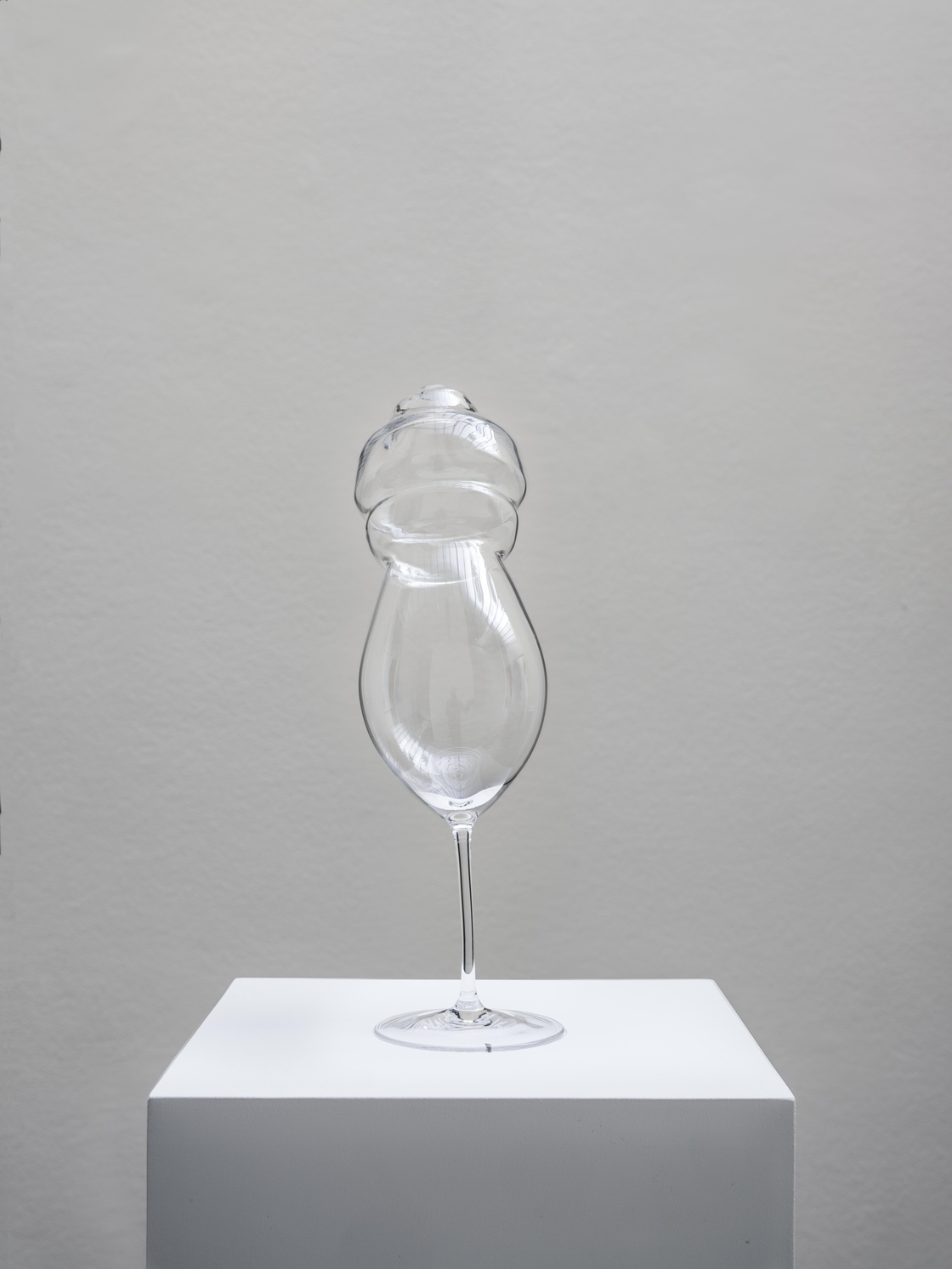 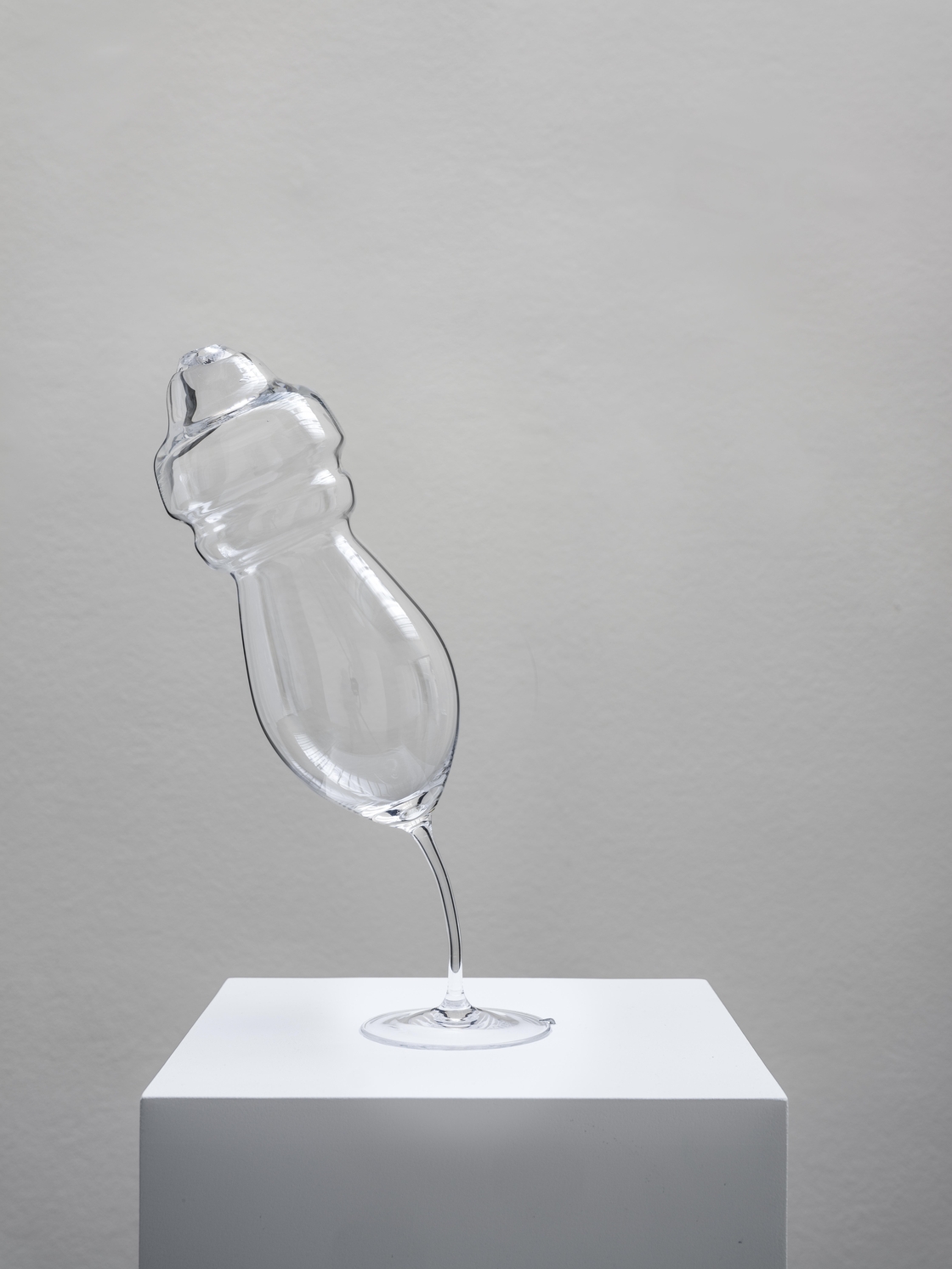 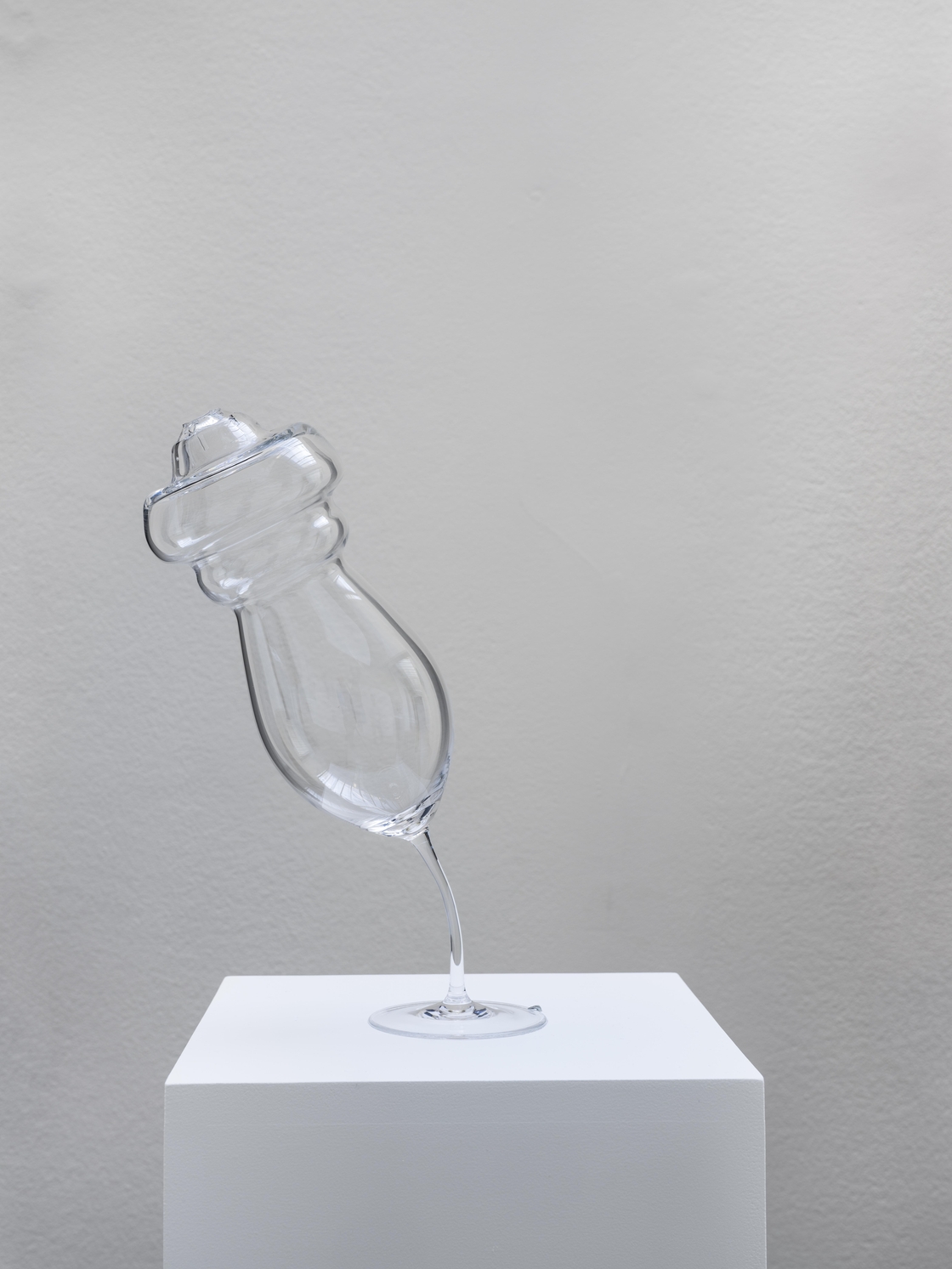 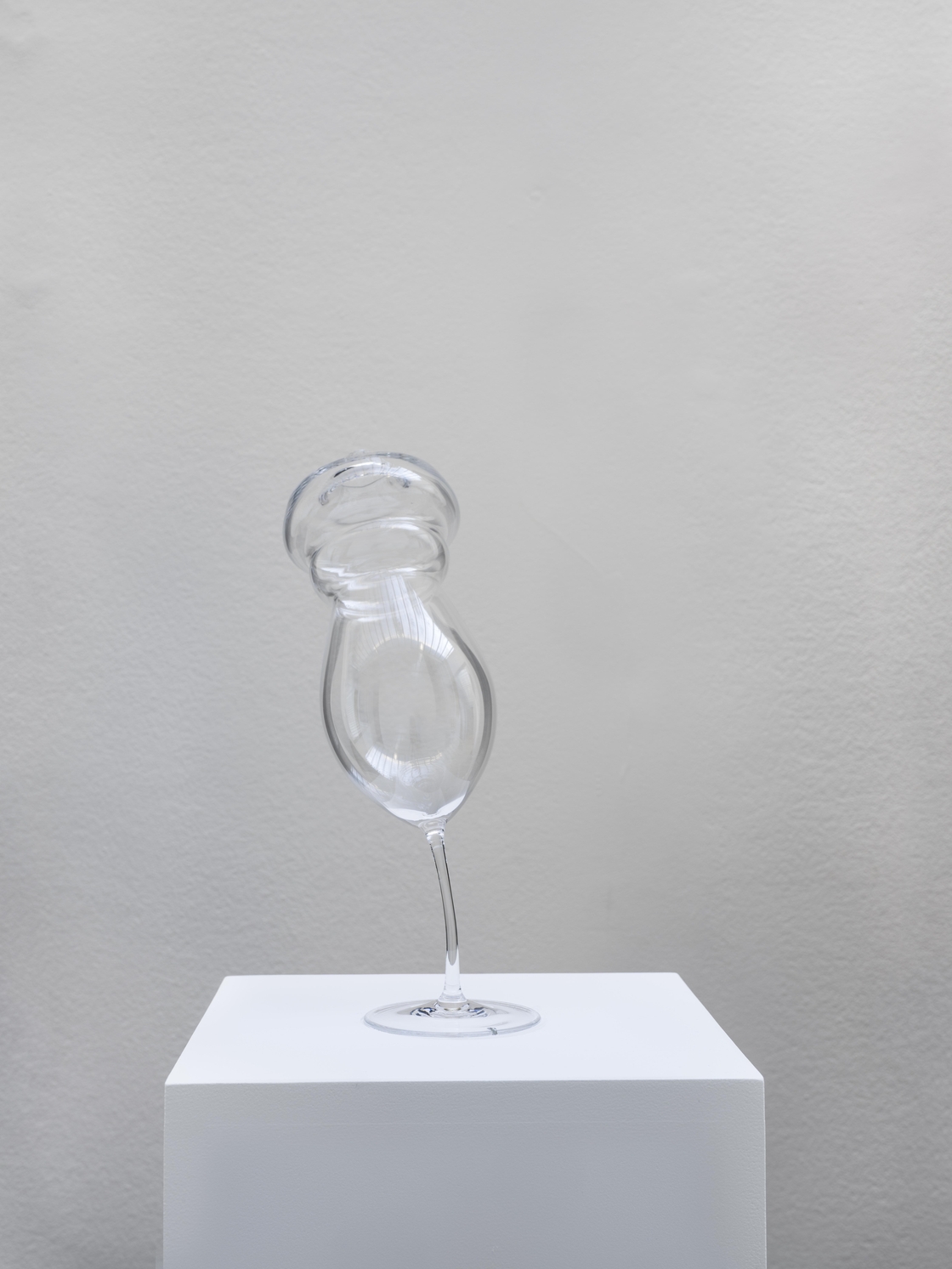 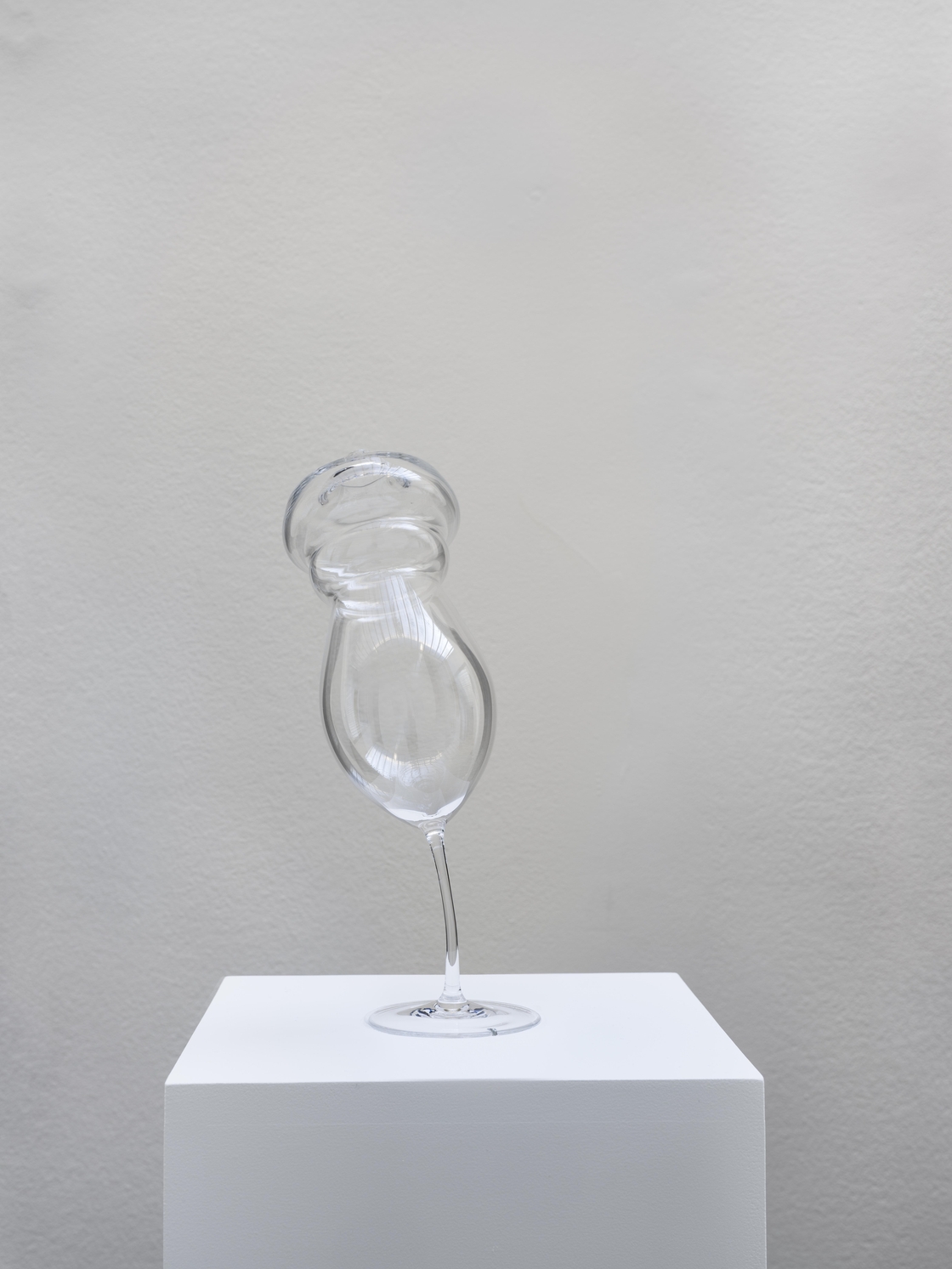 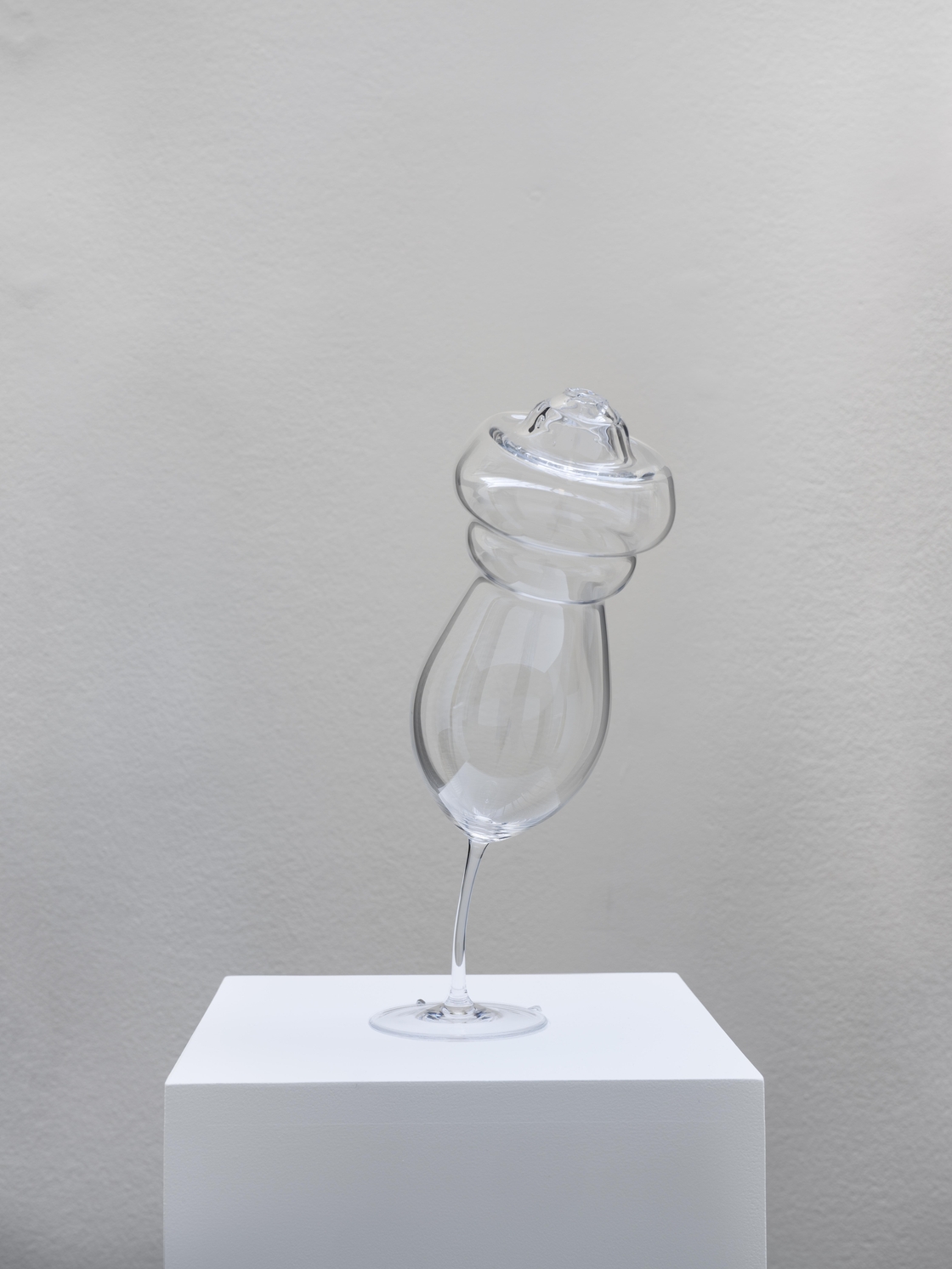 The captivating aspect of the three glasses is that although created in the same place they result not only from the actions of the magician but from a synthesis of several actions.

The magician’s intervention does indeed lead to the curvature of the stem, while that of a master glassmaker, whose breath brought the "hat" which caps them into life, and that has not been carved as it should have been, adds to this strangeness. With the consequence of perfectly blurring the perception of what results from craftsmanship and what from magic.

"In an age when increasing automation means less direct human involvement (not necessarily less human oversight) and an ensuing undermining of human gestures, simply creating potential for new ones, however small, leads to subtle kinesic permutations that no programming and algorithm-induced workflows are capable of."

Born in 1974, Tirana, Albania.
Lives and works in Berlin.

Since the 1990’s, Anri Sala has been working in a range of media including video, photography, installation, and more recently drawings and sculptures. His work explores the boundaries between image and sound in order to generate carefully assembled time-based moments which overlap one another. Through a new form of language, his work opens to multiple perspectives and interpretations, bringing together the past, present and future. According prominence to light, sound and space design, Anri Sala’s work is often presented in immersive spaces, thus stimulating our senses and creating a link between the body and the architecture.

Anri Sala has been awarded a number of prizes during his career, such as the The Vincent Award, Den Haag in 2014, and the Biennale di Venezia (Young Artist Prize) in 2001, among others.