HOUSTON—September 2, 2020—Early Christian texts describe acedia as a demon that besieges the soul at noon, when the day listlessly drags and delirious visions momentarily reign in the blinding light. From September 26, 2020, through June 20, 2021, summer solstice, the

Menil Collection will present a major exhibition of seven sculptural works by the artists Allora & Calzadilla that revolve around this concept, serving as a manifestation of noon’s hold over humankind and as a metaphor for the uncertainties defining our time. Created specifically for the Menil Collection’s main building, Allora & Calzadilla: Specters of Noon will use sounds, cast shadows, and novel sculptural materials to evoke an awe-inducing atmosphere of bewilderment and beauty.

Rebecca Rabinow, director of the Menil Collection, said: “Since its founding, the Menil has supported substantial collaborations with contemporary artists who use our permanent collection as a jumping-off point for new work. We are proud that our relationship with Allora & Calzadilla has given rise to such an astonishingly inventive, profoundly thoughtful, and poignantly beautiful new exhibition. We eagerly look forward to sharing these Specters of Noon with our community.”

The Puerto Rico-based artists visited the Menil Collection repeatedly over the course of four years to develop this exhibition and studied the museum’s renowned archives and holdings of Surrealist works of art. They explored the historic role that Surrealism played in the Caribbean in the years surrounding World War II, including its pivotal role in anti-colonialism, and the movement’s fascination with the importance of noon. Jennifer Allora and Guillermo Calzadilla extended their research by connecting this history to the current moment by seeking out shared connections between Houston and their own home of San Juan, both port cities that have been deeply impacted by energy commerce and the effects of a changing climate. Among the works that have emerged is Blackout, 2020, created from a Puerto Rico Electric Power Authority transformer that exploded during Hurricane Maria in 2017. The artists bisected the transformer’s steel exterior to expose its interior workings, which they cast in bronze. The shiny metallic conductive wire, radiator pipes, and insulators are juxtaposed with the matte exterior casing, creating a sculptural division that references the exhibition’s theme of solar noon, when the sun, at its zenith, cuts the day in half. The deep hum of reverberating electricity buried in the relic will serve as a tuning device for a live vocal performance composed by Grammy Award winning, Pulitzer Prize-winner, and Oscar nominated avant-garde composer David Lang, and is inspired by the sounds of electricity and a volatile power grid.

Other works in the exhibition demonstrate Allora & Calzadilla’s use of nontraditional materials to reflect on the complex intersection of contemporary issues, history, and the natural world. Graft, 2019, is composed of thousands of yellow blossoms that were cast from the flowers of an oak tree native to the Caribbean. Created through a fabrication process originally developed for scientific purposes, the hand-painted petals are reproduced in seven degrees of decomposition, from the freshly fallen to wilted and brown. Installed as if a wind has swept the fallen blooms across the gallery floor, the sculpture alludes to deforestation as a consequence of colonial exploitation.

Entelechy, 2020, is a monumental coal sculpture cast from a tree struck by lightning. The artists sourced a tree species found in the forest of Montignac, France, where, in 1940 during World War II, a group of teenagers came across a massive tree uprooted during a storm. A shaft of light piercing the hole in the ground revealed the now-famous Lascaux Cave, an underground cavern with hundreds of prehistoric wall drawings. Allora & Calzadilla were inspired by theorist and Surrealist author Georges Bataille’s account of the discovery. He described the cave as a place of profound wonder and identified it with the birth of art and by extension, a new conception of prehistory and human history. Vocalists will perform on this tree-shaped coal in the galleries. The musical score, constructed by Lang, references the only image of a human figure found in the cave, a hybrid of a bird and a man.

A soundscape, also organized by Lang, will permeate the gallery space, augmenting the hypnotic atmosphere of disorientation that the artists are creating. Lang worked closely with the artists to develop an eight-hour cycle of constantly evolving sounds that will run daily in the exhibition, and according to Lang, “sonically sculpt the day.” A combination of instrumental, vocal, and electrical recordings, the sounds will respond to and activate the works of art on view. The exhibition will conclude, in its final weeks, with a series of live vocal performances, all composed by Lang in collaboration with the artists, and led by the renowned Philadelphia-based chorus master Donald Nally. DACAMERA, based in Houston, will partner with the Menil to train the vocalists who will be performing the pieces.

Michelle White, senior curator at the Menil Collection, said, “The struggle to generate the artistic forms and vocabulary to probe and understand the delirium of the present is the basis of Allora & Calzadilla’s most recent work. Drawing from the history of Surrealism and the unsettling visual strategies of strange juxtaposition that defined the movement, they address these themes by transforming the galleries into a land of displacements, hybridity, and unexpected convergences. As we developed and installed this show, the social injustices that the artists have devoted their career to examining have been evermore revealed and amplified by new traumas being posed by weather catastrophes, civil unrest, and the current pandemic. As such, Allora & Calzadilla’ s project provides an urgent lens and proposes that there is great potential found in moments of disorientation and mystification.”

Jennifer Allora and Guillermo Calzadilla share a statement on the installation: “In the fourth century, Evagrius Ponticus, in laying out the seven deadly sins, described the ‘most oppressive’ of all temptations as acedia, a spiritual dryness and lack of care towards the world that plagues during the hot midday hours and is characterized by a feeling of psychic exhaustion and listlessness. Writing under the harsh conditions of the desert, he personified this terrible mood as the workings of the ‘noonday demon’ or "Meridian Demon," who ‘makes the sun appear sluggish and immobile as if the day had fifty hours.’ This affliction in many ways seems to summarize the contemporary moment in which one finds oneself feeling supremely awake, animated, immersed in very strong sensations and feelings, but not alive. Acedia makes the present intolerable and the future impossible to imagine.” 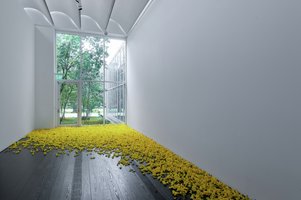 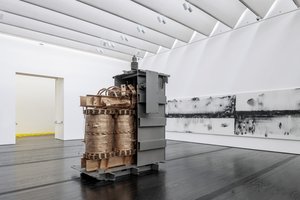 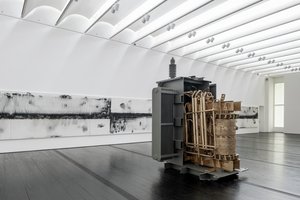 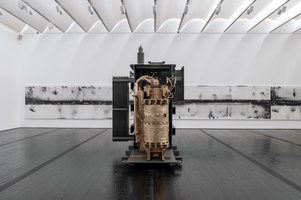 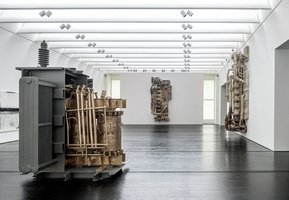 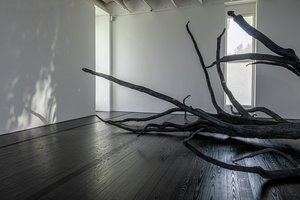 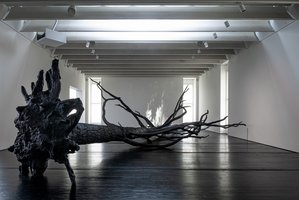 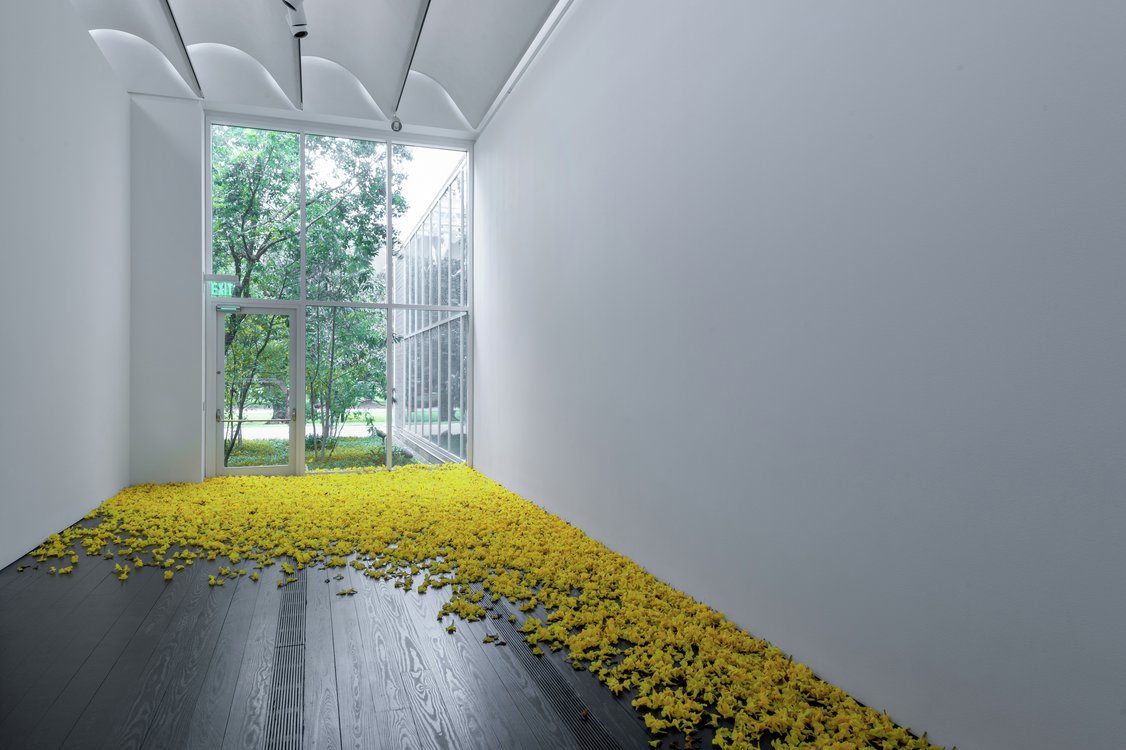 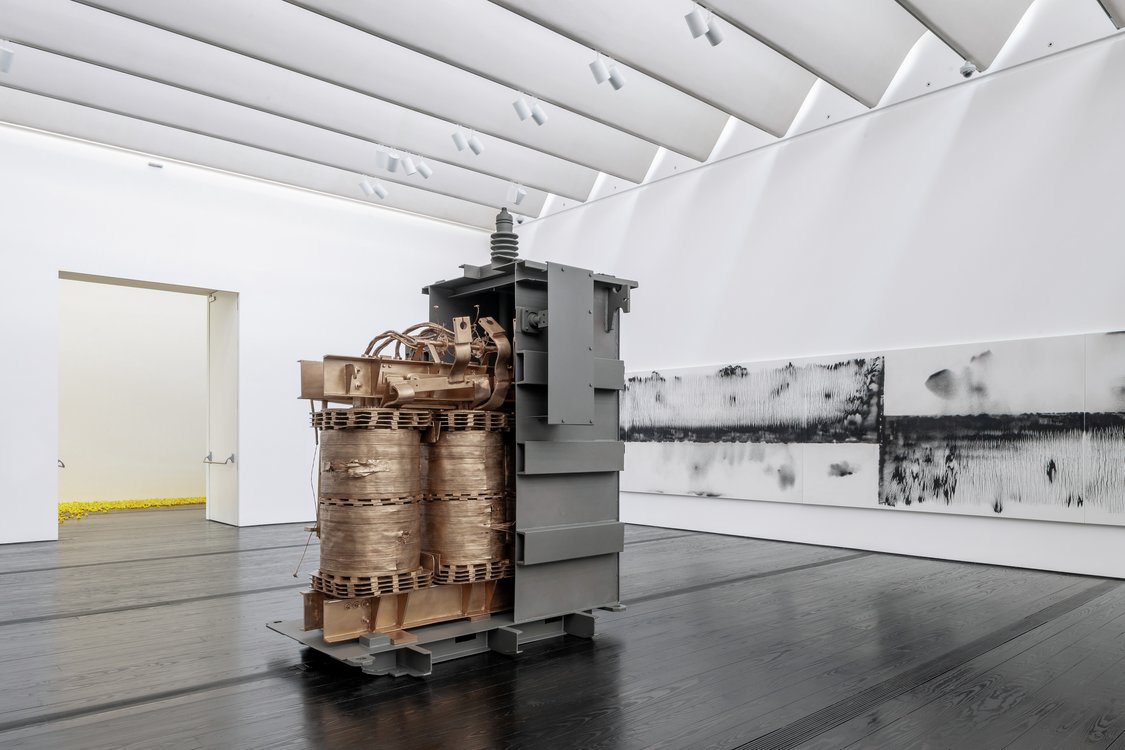 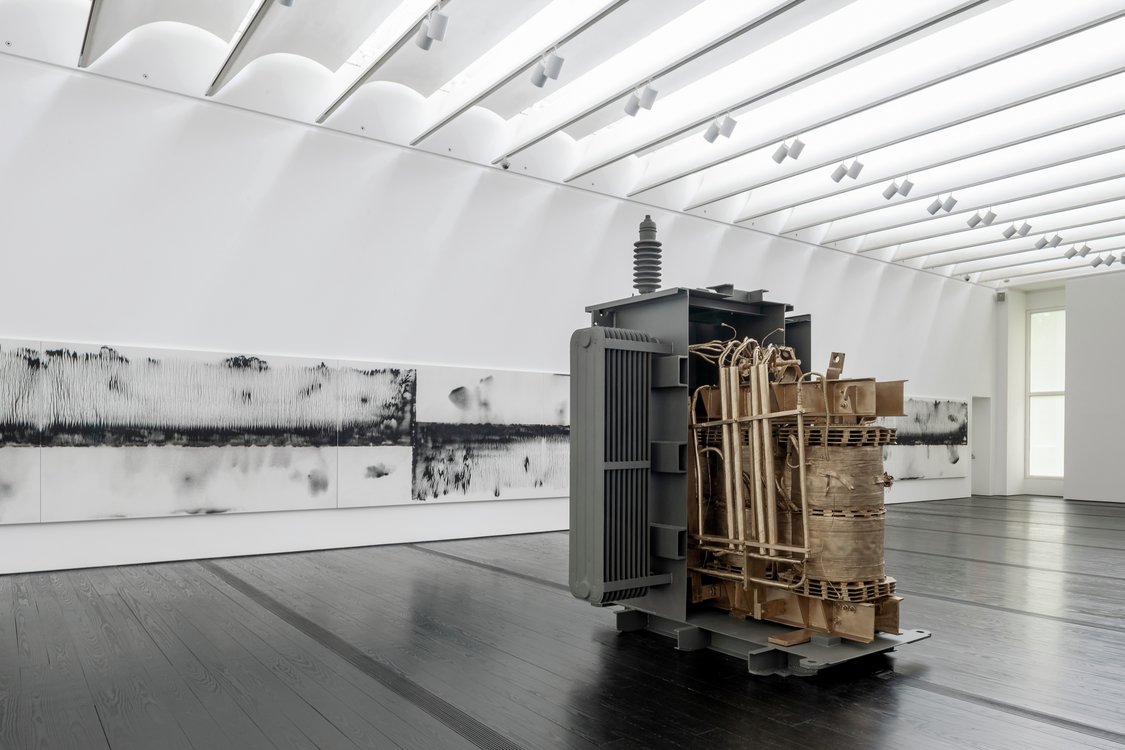 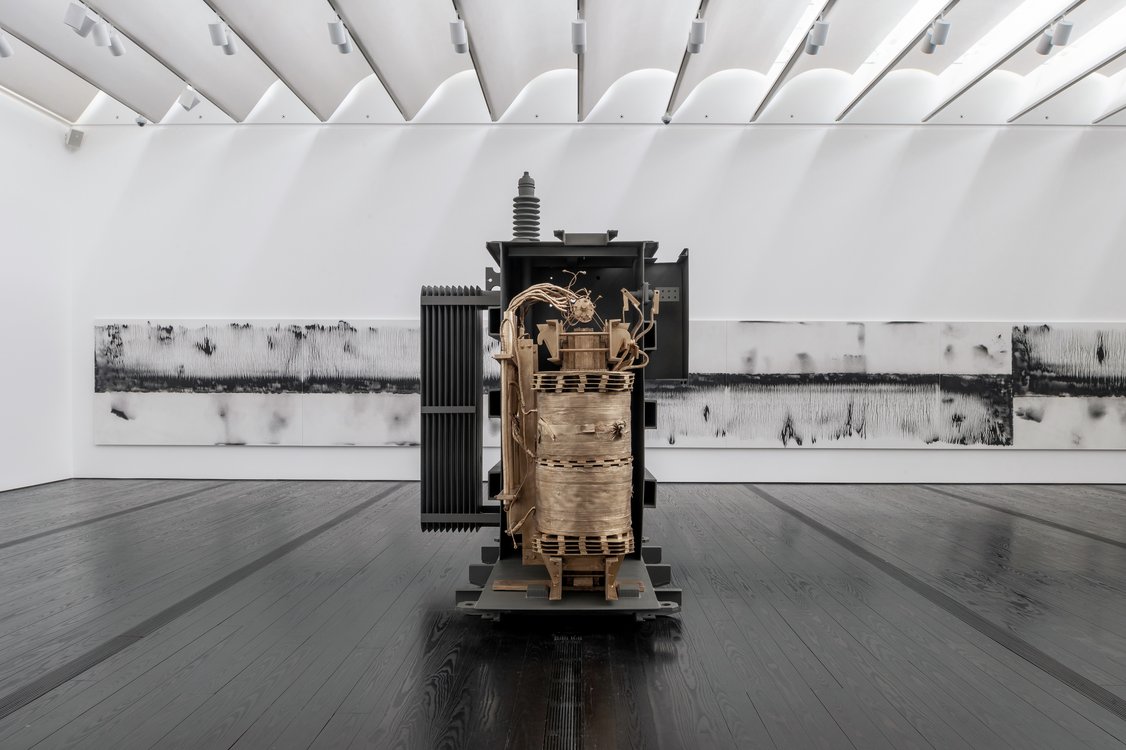 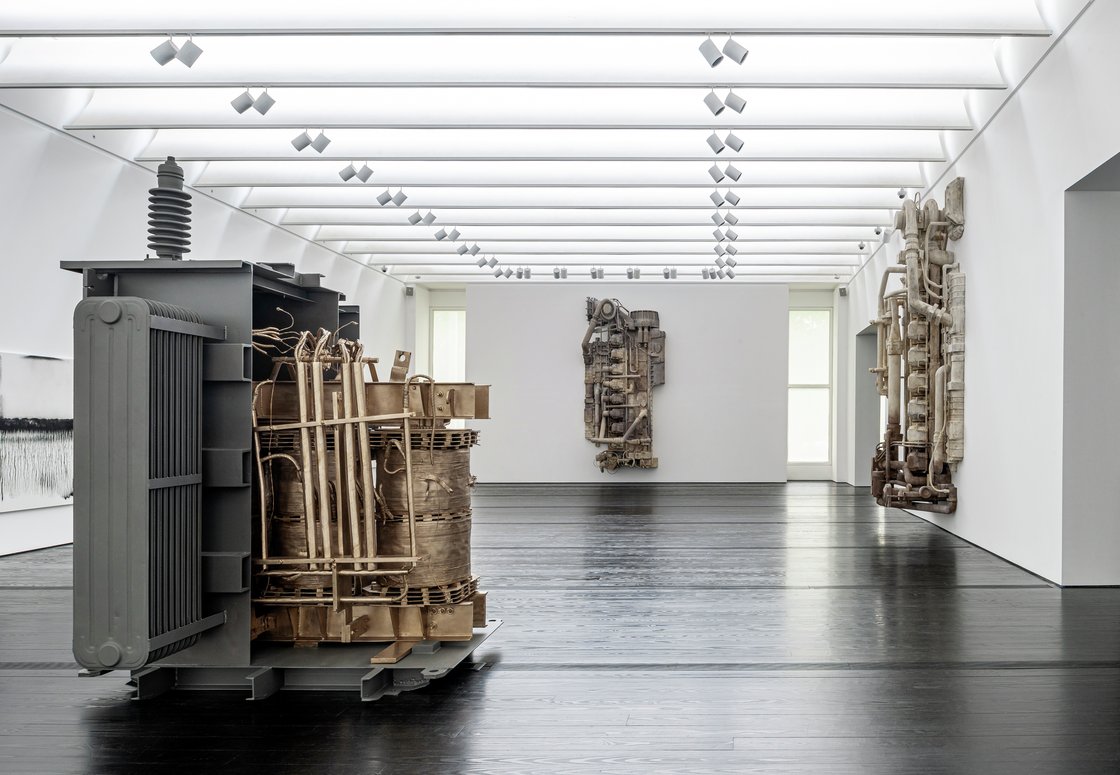 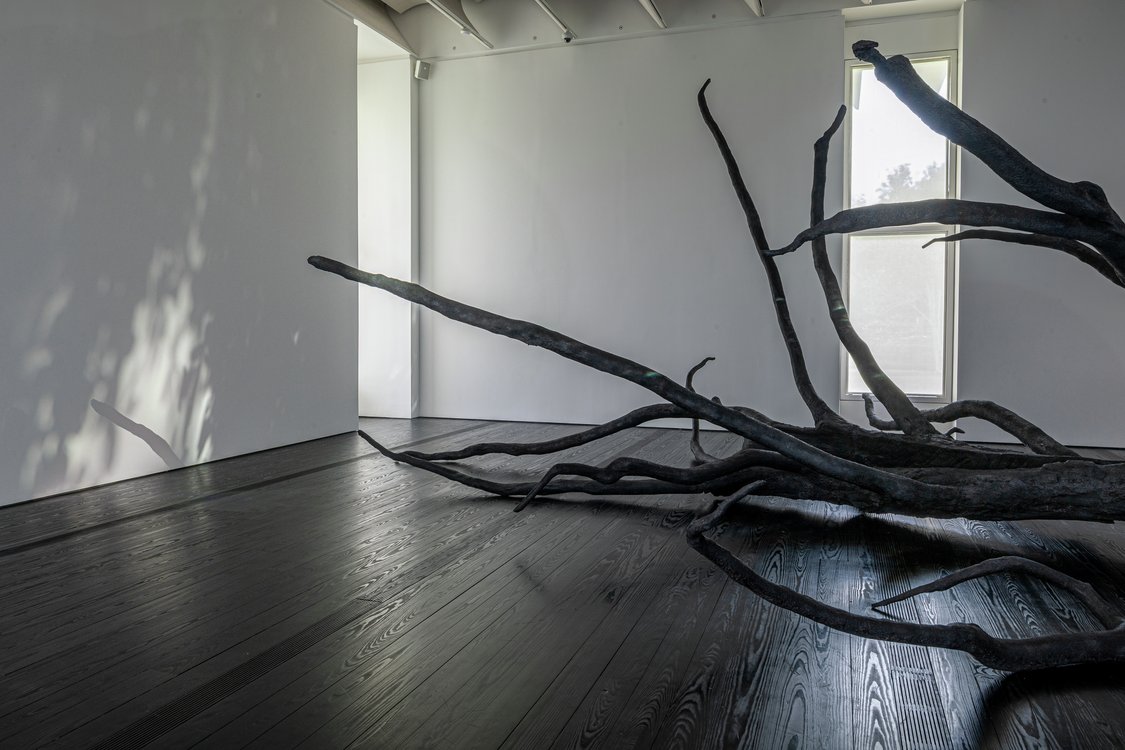 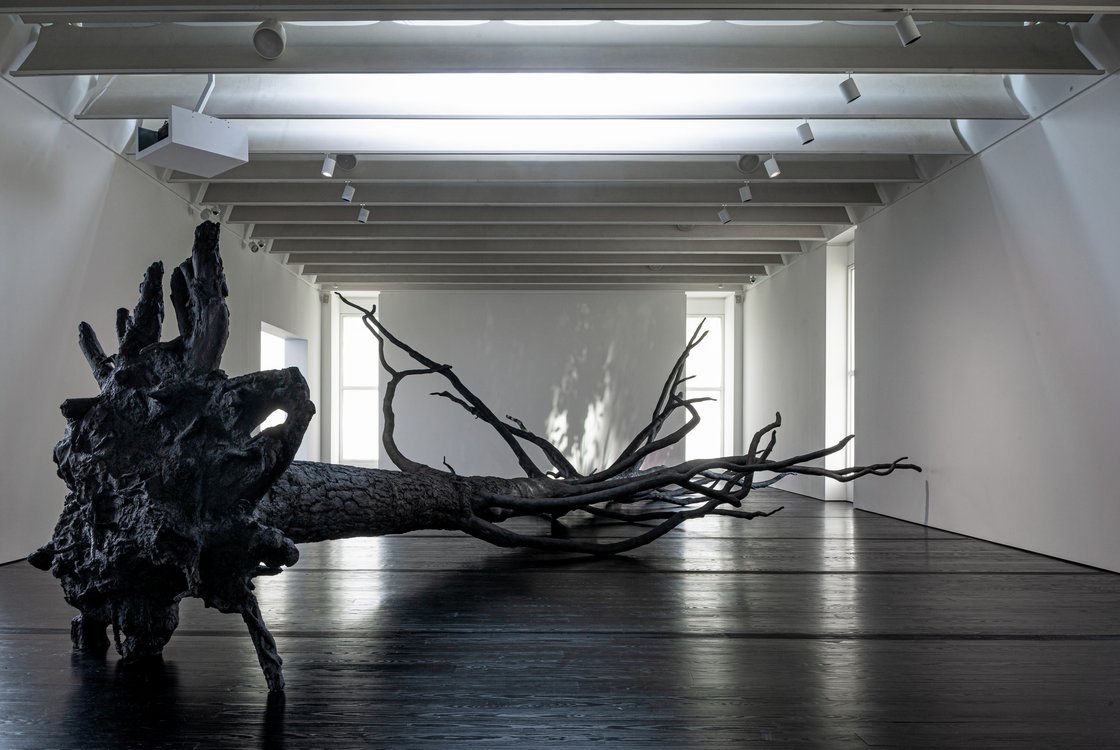