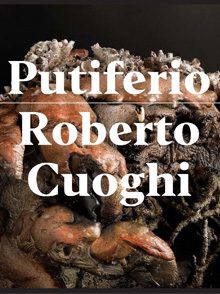 This publication documents the opening night performance and exhibition by Italian artist Roberto Cuoghi (born 1973) at DESTE's Project Space on the island of Hydra in 2016. In Latin, "putiferio" literally means "to bring the stink," signifying chaos or a taste of hell. The fantastical eponymous installation created by Roberto Cuoghi depicts an onslaught of ceramic crabs, many of which were fired on-site during the dramatic opening that took place on the rare, simultaneous occasion of the summer solstice and a full moon (an event known as a "Strawberry Moon").

This volume is composed of an extensive selection of photographs taken before, during and after Roberto Cuoghi’s visceral performance in the island’s former slaughterhouse, alongside an incantation written by the artist.